Since I only frequent the best places for locating high-brow cinematic art, I found myself a while back at Walmart (or perhaps it was a Zellers store before they all went under) and while sneering at some of the $2.99 offerings, I finally decided to bite at a DVD I found for one dollar. 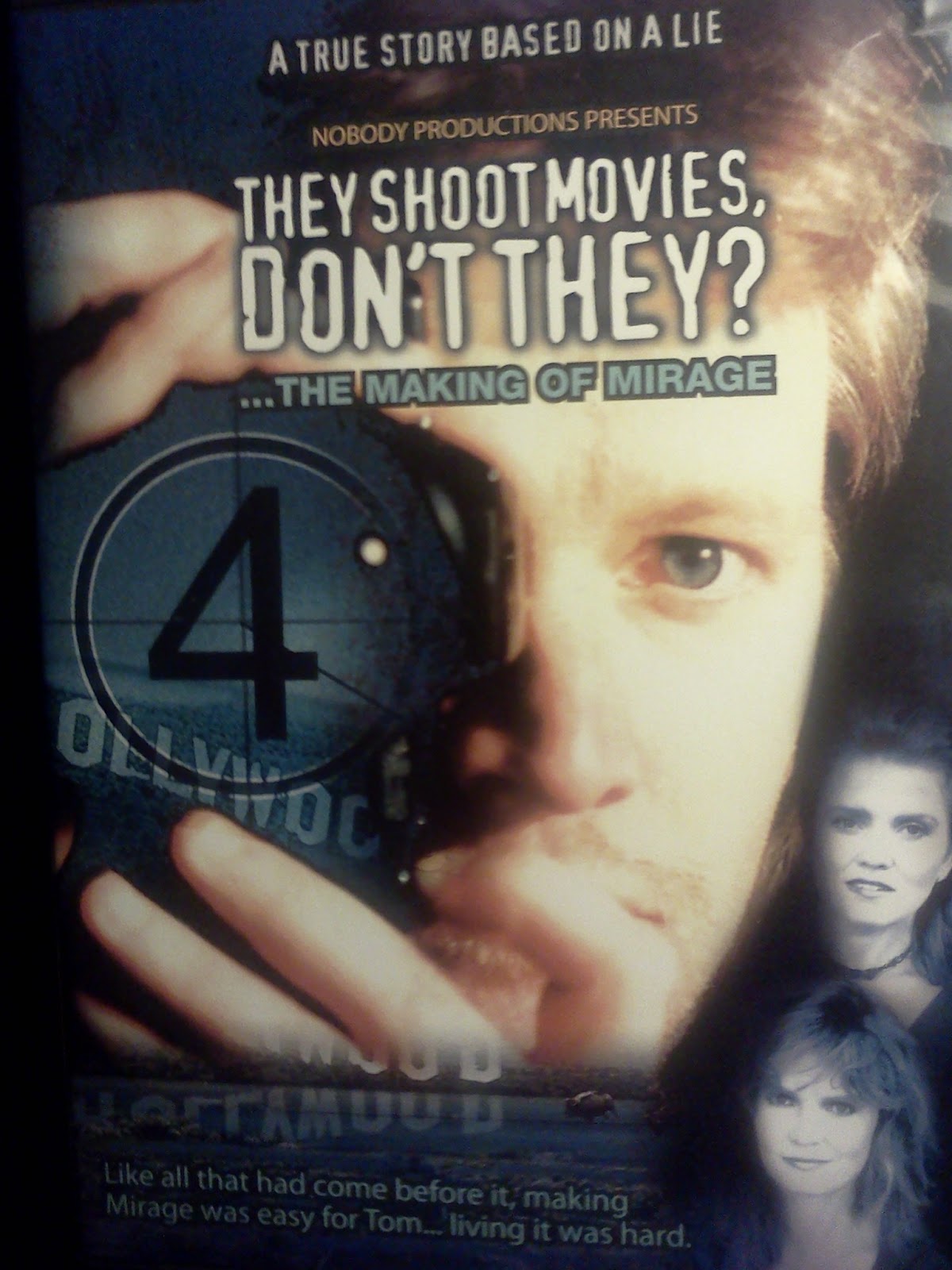 They Shoot Movies, Don't They? (...The Making of Mirage) is a 2000 mockumentary (if you haven't figured that out after about 10 minutes of viewing then you are, as they say in the professional wrestling business, a "mark"...apparently there were a few when this was screened on IFC).

It pretends to tell the story of wannabe whiz-kid filmmaker Tom Paulson (played by Tom Paul Wilson...get it?), a well-paid flunkie at Universal Studios who decides to set off with his career savings and take a chance on making his own low-budget feature, Mirage. Things don't seem to launch badly for Tom as he basically manages to get the film shot but the distributor he had lined up balks at giving him the final $80,000 needed for post-production unless the film is taken away from the director.

After arranging a conditional deal with a business friend to come up with half of the funds, the rest of this film shows Tom's pursuit of the remaining cash while the alleged director of the "documentary" Frank Gallagher provides the running narration. Along the way nervous girlfriends, skeptical producers, and potential investors running for cover are featured in talking head interviews, until Tom, who has come to realize his own life has paralleled the character in his movie, arrives at a drastic course of action.

Don't get me wrong - They Shoot Movies, Don't They? is an earnest and gutsy attempt to put this "exposé" of the film business out there through obviously limited means. The plight of the main character is one people can relate to. The atmosphere seems appropriate in some settings. (And I kind of felt bad that , according to IMDB, not many of the folks associated with this flic have done all that much in the 14 years that have passed.)

I truly wanted to like this film but there were serious issues that were hard to ignore.

The acting in the film, at times appropriately subdued, still never rises to much more than glorified film school levels. Gallagher's pacing leaves something to be desired ...and then there's the question of suspension of disbelief. One of the major problems with buying into the "authenticity" of the story is that you never get to see one single frame of this alleged film called Mirage. Not when Tom is working at the Steenbeck bench with his editor - not when he rents out an auditorium to show friends and potential investors a rough cut of his work. Nada...not once...not even a blocked or unfocused view that lasts a few seconds.

Plus...seriously..."the movie world is a cold and unfeeling place" - we haven't had that covered before?

So that brings me back to my original question...was it worth it? Well, for the cost of $1...yeah, sure. I've seen bigger wastes of time and there was a certain likeability behind attempting this in the first place. And who doesn't want to root for someone trying to break away from the system and do their own thing?

But here's the rub...if you go to the official site for the film, what do you see on the home page?...the actual embeded FULL VERSION of the movie hosted elsewhere on someone's YouTube site. So the filmmakers seem to be fine with letting you watch their flic for free...