Coyote is One Rabid Beast

The under-the-radar factor:
Director Trevor Juenger has seen his movie winning a few awards at some of the lesser known/specialized film festivals... and being banned from other screenings. This "art-house horror film" is scheduled for distribution this fall from Wild Eye Releasing.

'SLEEP IS THE ENEMY."

No two ways about it... Bill has issues. 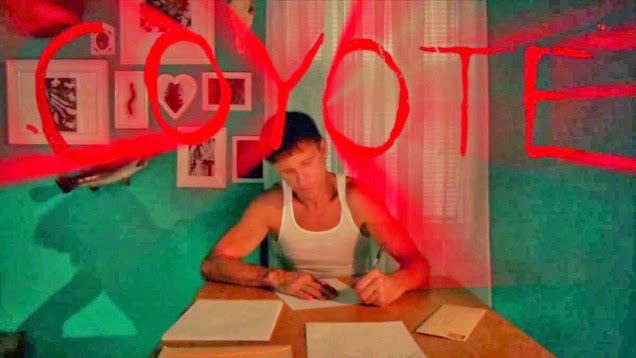 Bill (Bill Oberst Jr.) has some "mommy" issues, typified by his inability to write her a correspondence to describe how he's getting along (which is...pretty lousy). This is ironic given that Bill is suppose to be a writer...but apparently is not much of a storyteller. He has issues with paranoia, imagining masked men coming into his home in the middle of the night to assassinate him. He has some issues with women in general - like the ones he calls up on cable shopping channel programs, threatening them. More than anything he has issues with sleep. He's an insomniac who seems to be petrified to fall into a peaceful slumber. He bangs away at his typewriter or does push-ups just to prevent dozing off. He yells at the woman he has just bedded - "Never let me sleep!" - after he has accidentally caught a few winks. "Victory" is when he tapes his upper eyelids to force himself to stay up. But Bill could be winning a battle that's only hurting him in the end. He loses more of his grip on reality the longer he goes without any shut-eye. We see him in two different versions of a job interview - each seemingly odd in different ways. We see him in the act of pursuing...or is he being pursued? What is the real world and what are products of Bill's warped, tortured mind become increasingly hard to distinguish as the story goes on, but whoever could be after Bill is gonna get a wupin' - he's in shape, has weapons, and is ready to rumble. As the trailer reveals (in all of its four-letter blasts) there is certainly a lot going on with this character...

There is no point in trying to explain the storyline in Coyote, as it remains a surrealistic knot to untangle throughout. You could describe every single scene in sequence and not be able to give an indication of what the film is "about". Fortunately, not "getting it" is not important here - Coyote grabs the viewer from the first scene and never lets go...no matter how hard you may want a release from the grip.

There is a point in repeatedly warning folks that this flick is not for everyone. In case you need further convincing of that, you should take a gander at this very NSFW clip...

Be grateful I didn't subject you to a scene of the character urinating into a bottle and then...

I will say I have grown tired of low budget filmmakers doing low budget versions of better financed offerings, rather than accept the austerity of their means to experiment and run wild with their imaginations. Juenger does not pass up on the opportunity and concocts a bizarre but captivating piece of raw cinema that I was more than happy to take in. For all its wildness there is a particular vision here: you may not know where the plane is going - and it seems to be going everywhere - but you're always convinced the pilot knows what he's doing. The imagery in the film is well done and often startling. The musical score by Michel Schiralli sets up the mood in each scene in a more than appropriate fashion. The ultimate strength of the film, however, lies with Bill Oberst Jr's rather amazing performance. He truly carries the movie on his shoulders in convincingly portraying the walking time-bomb this man has become.

The folks behind this film describe it as "art-house horror". Coyote scores well on that hybrid front, is deserving of an audience and can indeed be appreciated by the open-minded and resilient among us. For the rest of you, I'm sure the next Tyler Perry magnum opus is on its way soon.
Posted by film guinea pig