The Sun Still Shines For Cloudburst

Cloudburst is a low-budget indie offering (there really aren't that many high-budget independents, are there?) from Thom Fitzgerald of The Hanging Garden fame. The film is a kind of geriatric version of Thelma and Louise, centering on the domestic dilemmas of an aging lesbian couple portrayed by Oscar winning actresses Olympia Dukakis (Moonstruck) and Brenda Fricker (My Left Foot).

Fricker's Dot character, a woman robbed of most of her sight and relying on her live-in lover Stella (who knocks back tequila like it's Evian) for the basics, has resided in a small town Maine locale for years but clueless granddaughter Molly (Kristin Booth) has new plans for her - a placement in the local nursing home. Stella decides there is an obvious solution - kidnap Dot from the long-term care facility and make a beeline to Nova Scotia to get hitched in a country that allows gay marriage. Along the way they encounter a hustler/dancer (newcomer Ryan Doucette) trying to get back for a visit to his ailing mother - his circumstances correspond enough to theirs to allow for an odd but fruitful partnership to ensue.

Sure, Cloudburst suffers a few faults - the arrangement between Doucette's Prentice character and the two women falls a little too conveniently into place. Also, stretching the suspension of disbelief boundaries is the almost complete lack of homophobia that the women encounter after crossing the border - Fitzgerald's Canada is like Michael Moore's in Sicko ("Canadians don't have a problem with their health care") or Bowling For Columbine ("Canadians are so safe they don't have to lock their doors"). There's also a little too much corniness leaking out of the character's mouths now and then...it's unfortunate that they don't always sound like very real people but rather like ideas...

...but the virtues of Cloudburst outweigh the weaknesses by a large margin and nothing emerges more powerfully than the talents of the three leads. Dukakis and Fricker are in first-rate form, having a grand old time playing off each other. Doucette is someone to watch re: serious cinema charisma. (He displays a screen presence that reminded me a bit of Mel Gibson in his earlier times...the camera adores him.) There is also no doubt that for all the vulgarities (Stella is way too fond of using the four letter C-word) there is a genuinely sweet, affectionate love story being told. 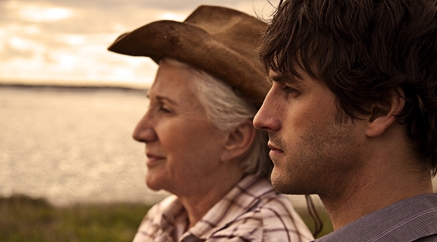 Playing a powerful supporting role is the Nova Scotia landscape, breathtaking in beauty and respectfully worshiped through the talents of cinematographer Tom Harting. But what seems to really come through is the gutsiness of the whole effort. Films about senior women are rare enough - name the last one you saw following the chronicles of two aging lesbians. The raunchiness and grit in the film comes across as earnest and Cloudburst emerges as a crowd pleaser that allows you to enjoy most of the cinematic forest even when a few of the trees seem misplaced.

Side note: Cloudburst opened in Toronto in early March at the downtown Carlton Cinemas and, at this time of writing at the end of April, still unspools for two screenings a day there. Some of this can be attributed to the proximity of the theatre to the Toronto gay village area around the corner and up the street. There is also a straight mature moving-going audience that waits to see the rare offerings portraying their peers with similar concerns regarding ageism and all the rest. In it's quiet way, Cloudburst has managed to successfully find a deserved following from two rather distinct camps - no easy feat at all.  If you come across it, I suggest you give it a chance. (Update: Into the last week of May and Cloudburst is still playing twice daily at the Carlton - a significant accomplishment for a small indie flic of this kind.)

I say this film tastes - GUTSY.