Throw Around Some Confetti...To Celebrate A Fun Film

After looking at the somewhat less than successful mockumentary They Shoot Movies, Don't They, we find ourselves back in faux cinema verité territory with the 2006 comedy Confetti, directed by Debbie Issit. It's a film I first saw at a Sunday morning screening several years back at the Toronto International Film Festival, which I credited with helping launch my long day ahead to a good start. 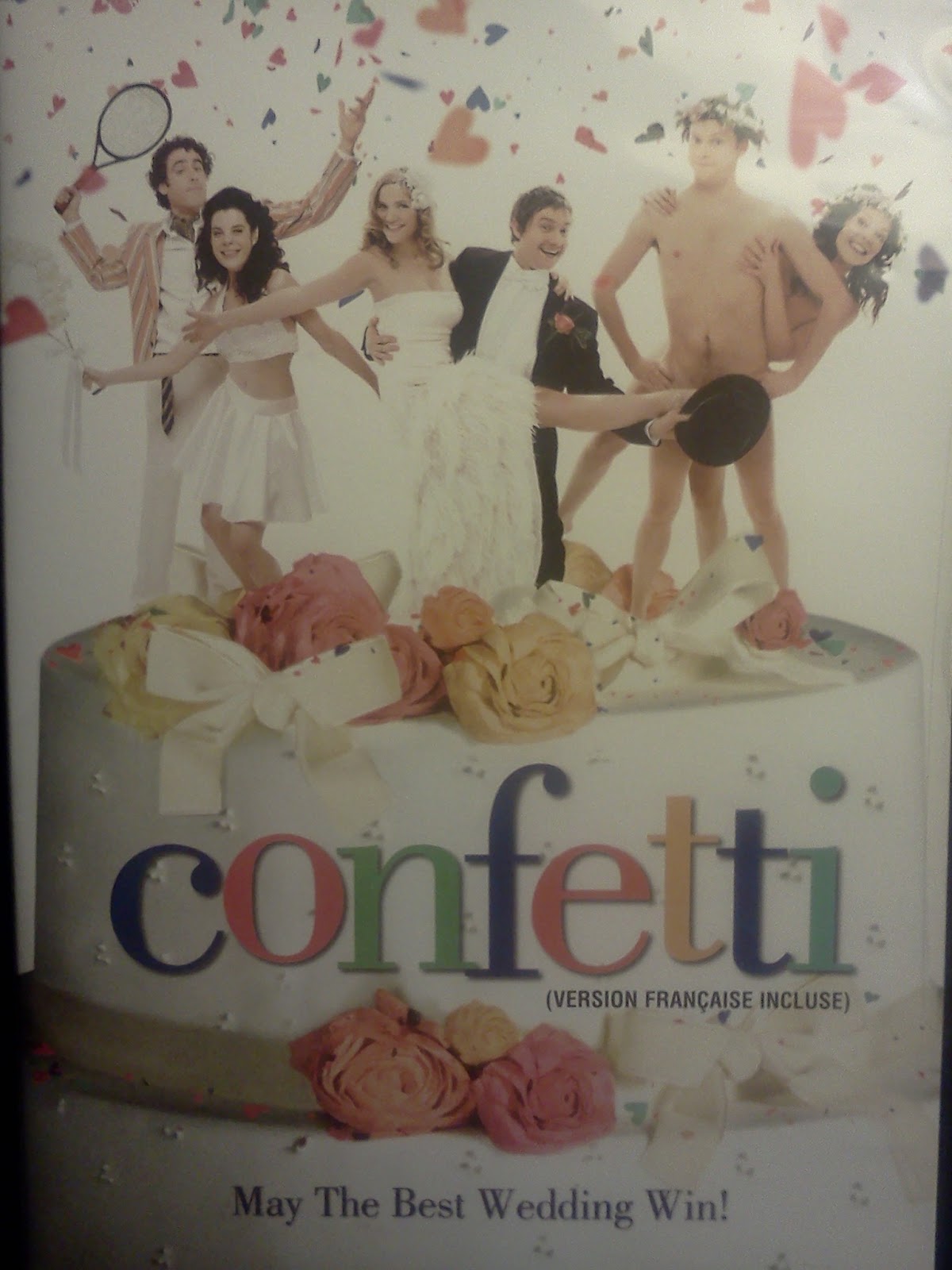 Confetti Magazine decides to stage a "Most Original Wedding of the Year" contest that will be televised, with a dream house as the big prize. The finalists turn out to be Matt and Sam with a Hollywood musical theme (doesn't help that she's tone deaf and they really can't sing and dance); Josef and Isabelle, who bring their "destroy the competition" attitude (and her distractingly flared nostrils) in as part of their tennis oriented wedding performance; the full-frontal carefree naturists Michael and Joanna, who appear throughout much of the film without a stitch of clothing and want to appear that way on the cover of the magazine if they win. (Michael: "I'm suppose to sit like this so you can't see my penis...but you know, I'm looking at my penis now and it seems absolutely fine to me." Fine, Michael.)

Of course the people running the magazine have their own ideas on who would  look best on their cover and much of the film deals with their attempts at behind-the-scenes meddling, a great deal of which is dumped on the wedding planners hired for the show. Along the way the couples fight and argue with their friends and family, their "creative" teams and instructors...and, of course, themselves.


The film is pretty much stolen by the two gay planners, Archie and Gregory, played by Vincent Franklin and Jason Watkins - just when you feel the film is starting to run out of gas (and it happens a bit) they show up in a scene and usually carry on with something amusing. Their roles of referees to the participants and the magazine honchos requires them to have their fingers in much of what follows and these two talented actors are up to the challenge.

The tennis couple get a little too irritating and the "reality tv" spoof may not be one's cup of team for escapism but, for the most part, Confetti works. This is the kind of improv oriented piece that has a lot of people comparing it to the movies of Christopher Guest...and not always in a most positive comparison.  While I have liked some of Guest's stuff and admit that he works with particularly talented people, I think it's a bit unfair for some to trash Issit's film. Confetti has an exuberance that I found to be infectious and really ended up liking it. It may be minor compared to Guest's creations but (in the same way Matt Helm wasn't exactly James Bond) it was still fun and worth watching. I say you should take a chance on it.