Eliza's Horoscope Could Have Told A Better Fortune

The English Canadian film industry has always struggled to achieve the quality, acclaim, and box office success that has been enjoyed by the French language offerings from the province of Quebec. Regard the landscape back in the 60's and early 70's: while the francophone region's artists scored global success with efforts like Mon oncle Antoine, Kamouraska, J.A. Martin photographe (winning Monique Mercure the best actress nod at Cannes), Les ordres, and others, their English counterparts saw similar achievements fewer and farther between (A Married Couple, Goin' Down The Road, and Nobody Waved Good-bye being notable exceptions).

Even English directors making films in Quebec couldn't quite get the same genie out of the bottle as the indigenous movie clan. A case in point was the 1975 release Eliza's Hororscope (which actually finished production years before), whose main claim to fame has been as the first starring vehicle for Tommy Lee Jones (going under the moniker of "Tom" in those days). How director Gordon Sheppard recruited the American actor and other details makes for a fascinating tale, for the production flirted with the direct or indirect participation of the likes of Hugh Hefner, Robbie Robertson of The Band, Genevieve Bujold, Martin Scorsese, Oscar winning actress Lila Kedrova of Zorba fame, and another unknown actor of the day named Al Pacino. 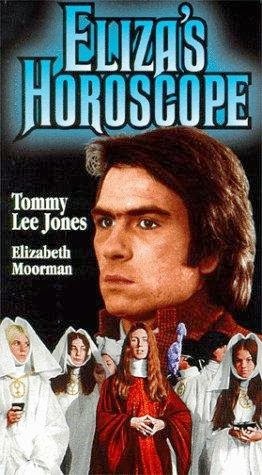 Just entering her adult years but still with an innocence that is both sweet and unsettling, Eliza (Elizabeth Moorman) arrives from rural Quebec to a less than prosperous section of Montreal to visit a Chinese astrologer living in a rundown flop house. The girl is convinced there will soon be a man in her life who will provide her with both material comforts and a child. The astrologer agrees that within a certain number of days she will indeed hook up with an Aries who will be the handsome man of Eliza's dreams, although the Chinese woman is clearly working under a different definition of "rich" to describe his qualities.

Eliza is invited to stay in the astrologer's building, where she shares a room with the earthy but still devout Catholic Lila (Kedrova). Later she meets the rugged Indian lad Tommy Lee (Jones...yes you get it...the director decided the actors would use their own first names. BTW, Jones is himself part Comanche.) Tommy takes a liking to pretty young Eliza but doesn't allow himself to be sidetracked from his hobby project - helping to blow up a commercial bridge as a protest against the exploitative nature the White Man has against the aboriginal population. For her part, Eliza likes hanging with him but is usually running off to strange locales in the city to meet up with even stranger people in hopes of finding her true love, oblivious to the fact Tommy is the man the astrologer was referring to.

Sheppard decides to follow Tommy's plight with a straightforward, no-nonsense touch, whereas Eliza's encounters are presented with surrealistic and dreamy (often nightmarish) presentations. (Sheppard insisted that pirated copies of his film have undesired jump-cuts arsing from a flaw in transferring from film-to-video but, regardless, much of the movie was intended as a voyage into the bizarro world of Eliza.)

Eliza's Horoscope is an admirable failure. Some will appreciate the admirable part and others will be too put off by the failure. Sheppard meant to touch upon surrealist and poetic elements a-la Bergman but ends up with something that more closely resembles Ken Russell on an iffy day. Some will quickly get irritated by what they would deem as a pretentious approach taken by Sheppard (who died in 2006 and never made another feature). I personally thought that while the movie has unusual elements in the narrative, they did not strike me as particularly inspired or organic attachments to the story. However, the film keeps a good pace and has some visual panache in spite of its low budget. As a historical entry, cinephiles may want to check out the powerful performance by Jones, who does indeed show all the makings of stardom in his role.

I'm halfway on this one. Do I recommend it? For adventurous filmgoers I would probably say yes...but even for them, don't say you weren't warned.

I say this film tastes - TOO BUSY.
Posted by film guinea pig