This Profile Of A Killer Is A Self-Appointed Act

"Violence, whether spiritual or physical, is a quest for identity and the meaningful. The less identity, the more violence." - Marshall McLuhan.

I was thinking of that quote from the master of mass communication studies after viewing Profile of a Killer (2012), a particularly admirable far-from-Hollywood indie production that looks as technically solid as most of the fare coming out of L.A. First time feature director Caspian Tredwell-Owen serves notice with this project that he is someone to keep an eye on. 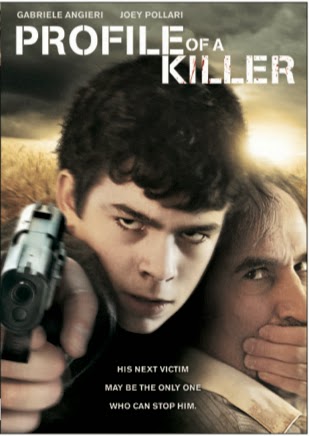 Retired FBI profiler Saul Aitken would rather put his feet up in his warm Florida home and read some of the many books he has written but agrees to answer the call of a friend in wintery Minnesota. Someone eventually dubbed the H-61 Killer is leaving skeletons around the state and Saul has the reputation of one who can figure out what makes such a criminal mind tick. Turns out that the killer is a teenager named David who would like to have these answers himself. David kidnaps Saul and reveals to his prisoner his plans regarding future victims - plans which the youngster himself doesn't really understand but has nonetheless plotted out meticulously. It's clear that this is not some out-of-control snot nose punk but as intelligent a dude as the profiler is in many ways. David basically forces his captive to help determine his next moves. For all his years profiling, Saul seems particularity challenged in trying to get a bead on this unique character before him. The murderer works fast and efficiently, frustrating the task force led by special agent Rachel Cade. She may not have initially liked Saul's presence stepping on her toes in the investigation but the victim list starts to add names too close to home (literally) for her comfort and it becomes obvious that unless captured, David will include Saul among the deceased.

Considering the body count and the gruesome images that abound, the emotional level in Profile of a Killer is at times as cold as the Minnesota scenery and some of the dialogue (particularly belonging to Gabriele Angieri in the role of Saul) seems a bit clumsy and not entirely convincing. Still, the pluses of this low budget production far outweigh any shortcomings.

The cast is solid, particularly Joey Pollari as David - displaying the right balance of cockiness offset by unease in his own skin - and Emily Fradenburgh as Rachel. In a film where the dialogue sometimes runs away a bit, her eyes and body language convey more than words, with her providing a commanding presence throughout.

Visually, the film exceeds expectations for work done on this budgetary level. Tredwell-Owen is in full command, providing high quality looks to every scene. The pacing, while it could be slightly tightened in spots, is mostly appropriate. While dealing with a conventional topic you might expect for a tv movie-of-the-week, the storyline has enough unique aspects to provide elements of surprise at the right moments.

Profile of a Killer is a film that would be worth catching regardless; given that it was done through such micro-means, it deserves a little extra attention to show that it's the work that goes in, not the bucks, that produces riches on the screen.