Attack Of The Herbals Is An Agreeable Assault

The under-the-radar-factor:
Horror-comedy....actually, make that comedy-horror flic...that has had limited exhibition. A bare bones production - the principal photography supposedly only took place on weekends, with the cast returning to day jobs during the week as director David Ryan Keith did his editing.

When one is writing up a critique of a film, the individual is going through a few different kinds of reviews in their head...and in the case of a low budget independent feature, three different kinds.

On the one hand is the evaluation of a work being done under limited resources, the "well, if only they had been able to do this" take on a project that was probably lucky to see the light of day at all. At the same time...

There is the review that has to be posted for the world at large that doesn't give a rat's ass what the budget was, what the obstacles were, and what could have been or should have been. The public has a bit of cash in their hands and are wondering if the bottom line verdict is that they should bother spending some coin for a purchase or rental of a film that will take up a few hours of their lives.

And then there's the other review going on; the "this is a worthwhile film to watch...IF you happen to be in this particular frame of mind/mood" observation.

So let's make it clear - Attack of the Herbals, for what it is and the way it was made, represents an okay enough time-waster IF viewers are in the mood for silly, goofy fun. 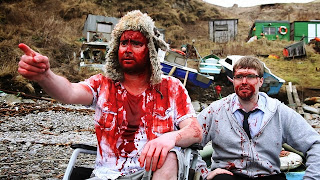 Jackson MacGregor (Calum Booth) returns to the sleepy Scottish village of Lobster Cove to a less-than-warm welcome. Most of the natives still equate the lad with all the negative actions taken by local heel Bennett Campbell (Liam Matheson) who has been buying up and redeveloping their quaint locale. One more target remains in the sinister Bennett's crosshairs - the postal station owned by Jackson's grandparents.

Russell Wallace (Steve Worsley), the one person in the village who likes Jackson, has just noticed a large wooden crate that has washed up on shore. As revealed at the beginning, the container holds the contents of a Nazi experiment that went way too wrong. Still, Russell and Jackson discover the herbs that have made their way to Lobster Cove taste delicious when done as a tea and that sets the wheels in motion - the two men will sell the substance to the villagers in an effort to keep the post office afloat. The plan works beyond expectations - the villagers (and even Bennett) not only can't get enough of the tea, they start acting peculiar when deprived of it - loud, violent and, eventually, murderous.


For a film supposedly made on a shoe string, Attack of the Herbals isn't a bad looking production at all. A lot of time seems to have gone into the composition of shots and the editing is crisp and efficient. The Scottish coast is scenic and there's enough visual panache to convince you the folks behind the camera know what they're doing.

The level of acting may not be of awards caliber but it's hardly an embarrassment either. Particularly good are Worsley as Russell, the friendly, simple guy who gives off the needed positive karma when things are dire, and Richard Currie as "The Roadrunner", the washed-up athlete confined to a wheelchair who exudes total cockiness and despair at different ends of his story line. Booth, who's a little too stiff with his delivery, and co-screenwriter Matheson, who can't produce any variety in his sneer veneer, don't fare as well.

As a horror movie, the "ick" factor really isn't around, as the scenes of violence come across as comical (if production values suffered a letdown, it was in the fake blood department). But as a comedy there are enough cute guffaws and even the odd laugh-out-loud moment, especially the one involving Roadrunner in a "thrilling" chase scene - between himself in a wheelchair and a plumpish attacker on a scooter.  It's actually pretty funny.

Some folks (not just the distributors) have not helped things by comparing this worthy effort to the likes of Hot Fuzz and Shaun of the Dead, since there is no comparison to those A-list entries. And the film does sputter out in the last few minutes, with the movie not so much ending as simply stopping. Still, as mentioned, this is a more than amiable time-waster if you set yourself up for it. Don't sit forward in your chair - lie back, put your feet up and enjoy it with a big bowl of popcorn and a couple of beers...

I say this film tastes - LIKE BUBBLE GUM.
Posted by film guinea pig