Briefly - The Boy in the Striped Pajamas 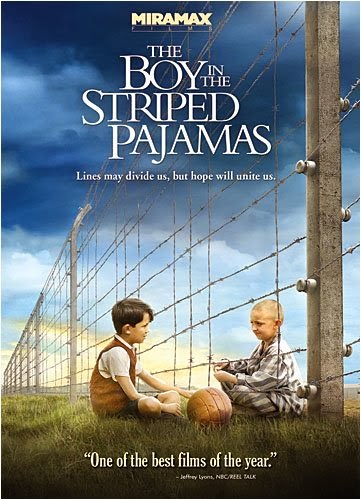 Based on the novel by John Boyne, this 2008 production set in World War II finds a privileged and naive eight year old German boy named Bruno moving from Berlin to the countryside as his commandant father is transferred to supervise a prison camp. Bored with the estate and without friends, Bruno sneaks away to check out the "farm" he can see through the woods. Coming upon the fenced area and noticing a boy named Shmuel on the other side, the German (very) slowly comes to know that the child and others wearing "pajamas" are Jews, considered non-persons by most of Bruno's family. The German lad has a particularly hard time  understanding the significance of the smell coming from the smoke stacks in the compound. Bruno tries to bring food to his new friend but in a moment of turmoil makes a decision that does not help Shmuel's cause. He tries to make amends by helping his Jewish friend find his missing father, a decision which leads to a tragic conclusion.


The first hour of The Boy in the Striped Pajamas is competently done in a well constructed made-for-tv kind of way but also comes across as conventional and predictable. Plausibility is also an issue - the two boys have a ridiculously easy way of getting together when needed. Hearing these "Germans" speaking with pronounced British accents didn't help the suspension of disbelief aspect either. The last half-hour is a kick in the gut and you'd have to be unconscious to not feel its devastating impact - still, much of the film comes across as conveniently contrived. History is filled with atrocities and this movie's best use is probably as an important lesson towards that regard. However, it's ending is probably too disturbing to be seen by the ages it would benefit most and the film overall wouldn't reveal anything not already known to most of the adult crowd. In that sense, The Boy in the Striped Pajamas is a film without a real audience.
Posted by film guinea pig