Freeway Takes You On A Wild Ride

The under-the-radar-factor:
Described as a modern take on the old Red Riding Hood tale, this production was apparently first destined for HBO. The film grossed peanuts at the theatrical box office, although it has since acquired a passionate cult following. Reese Witherspoon's career was not yet in full star mode, while Kiefer Sutherland was experiencing a downward direction in status before his 24 resurgence.

You've probably had someone stand before you and in their appearance, actions, or even by just coming out and stating it, make the claim of being a "rebel".

And of course you had a difficult time trying not to laugh.

John or Jane Doe Rebel may fancy themselves as a non-conformist, a dissident, a protester or agitator in a lot of ways but, looking at the big picture, you can still peg them for all their verbal or bodily bravado as someone who talks the talk better than they walk the walk. But sometimes that person isn't so much ''rebellious" but rather just simply "impolite". 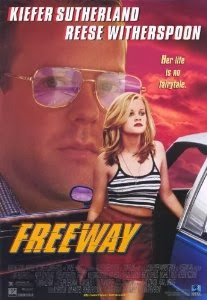 Sure, Matthew Bright's black comedy Freeway, with it's B-movie frankness set in mainstream trappings may be less rebellious than it thinks. But since being impolite in films seeking mass distribution and featuring recognizable names is really a very rare occurrence, loutishness may indeed qualify as cinematic mutiny. Freeway is a film that doesn't care what you think of it, doesn't regard what the rules are suppose to be and couldn't care less about polite sensibilities. That's what makes it feel fresh, invigorating and wicked...

...and, if you don't mind having those polite sensibilities assaulted...wildly entertaining.

Young Vanessa Lutz (Witherspoon) can barely read but has amazing survival instincts. After hooker mom (Amanda Plummer) and creep step-dad (Michael T. Weiss) are incarcerated, Vanessa gives the foster parent authorities the slip and heads out on a quest to rendezvous upstate with a granny she's never met. The car she stole breaks down on the freeway and the guy to the rescue is a nerdy youth counselor named Bob (Sutherland), who happens to be the I-5 Murderer who has been killing and then raping young prostitutes in the area. After appearing supportive and getting her to open up about her past, Bob reveals his true nature but isn't aware Vanessa is packing heat given to her by her (now dead) fiance. She shoots the perv full of holes but it turns out he doesn't die.

Eventually taken into custody, Vanessa's arresting officers at first dismiss her claims that the now disfigured Bob is the killer they've been after. With his proper but dimwitted wife (Brooke Shields...yeah, her!) at his side, Bob sees his assailant put into a juvenile detention center, where she quickly establishes herself as the queen of the cell block. The film plays out to an inevitable conclusion but produces many surprises along the way which are best not mentioned here.


Did that trailer give you a real idea of what the film is like?  Of course not. This was one hard baby to market as it really crosses into a number of realms while refusing to settle into any expectations.  Easy to admire but hard to sell.

Forget about Witherspoon coasting as of late and return to her pre-Election era when it was obvious what the movie world was starting to see in her. To say she owns this flic is an understatement. The really impressive thing about her dominant performance is how true it seems to ring from the first scene through to the last. This is truly the definition of a "wow" accomplishment. Sutherland is both suave and slimy when required to be, turning in a strong sicko role to be remembered by.

As far as the movie around them is concerned, it's "impolite" nature makes it unpredictable and spirited, although the chaos reigns a little too supreme towards the end, featuring a showdown scenario that has a few too many conveniences in place. However, while the subject matter is often undeniably dark and ugly, the spirit of the film allows the viewer to observe and even enjoy the madness. One wonders if this is closer to what executive producer Oliver Stone really had in mind for his own Natural Born Killers. Because it feels both socially impolite AND cinematically rebellious....