Martha Marcy May Marlene - Can You Ever Really Leave?

The under-the-radar-factor:
Following its premiere at the 2011 Sundance fest the movie was given a limited release in North America later in the year. It's achieved U.S. box office receipts of approx. $3 million.

There have been other films which cover the topic of someone trying to escape cults or being rescued from them. Two efforts that came out at about the same time were the James Wood vehicle Split Image directed by Ted Kotcheff, as well as the Canadian production Ticket to Heaven, featuring a young Kim Cattrall. As I recall, both those films featured cult members numbering in the dozens if not hundreds, loud yelling, constant singing and chanting, bodies being knocked around, and stakes involving life and death matters.

Sean Durkin's film Martha Marcy May Marlene uses a much subtler means of expressing it's story. Huge cult compounds are replaced by a small farm setting still being put together by hand. Chanting at the top of one's lungs gives way to male "family members" taking turns at the acoustic guitar, strumming soft ballads. Aggressive physical behaviors amongst many are (mostly) cast aside for the psychological trappings dealt with by one individual. If Split Image and Ticket to Heaven were The Ten Commandments and Greatest Story Ever Told of cult-topic movies, Martha Marcy May Marlene, even with the abuse depicted in it, is The Diary of a Country Priest-type offering. 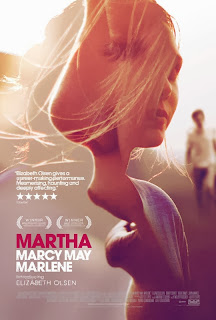 After a two year stay at a farm hosting a small community of followers, Martha (Elizabeth Olsen) beats a hasty retreat through the woods into the world outside. She's discovered in a restaurant by one of the cult members who seems to give her a pass and allow her to continue on her course of independence. A phone call to her estranged but guilt-racked sister results in her being picked up and brought into a new household by the lake some three hours away where adaptation issues quickly take hold.

Older sis Lucy (Sarah Paulson) finds her sibling's story about leaving some mystery boyfriend in the Catskills plausible; new hubby Ted (Hugh Dancy) seems less sure. But both spouses develop more questions about Martha's emotional and psychological state as her behavior patterns emerge; thinking nothing of skinny dipping in the cottage lake in broad daylight with families around; walking into Lucy and Ted's bedroom while they are having sex, just so she can curl up at the foot of their bed, etc.

The film's narrative bounces back and forth between present and past, where Martha was dubbed Marcy May by the cult's head honcho Patrick (portrayed by the solid as usual John Hawkes). The backstory reveals the subservience (including sexual abuse, both by Patrick and then the other men in the group) that Marcy May endured. As time went on Patrick relied on her as a "teacher and a leader" - until a home invasion conducted by the group members went tragically wrong, representing her true falling out with her brethren. Back in the present, Martha becomes increasingly more paranoid, convinced the cult is around and ready to reclaim her. It also doesn't help that the communal "the-more-you-own-the-more-you-are-owned" view she still has increasingly clashes with Ted's materialistic attitude, with Lucy caught in the middle.  A severe meltdown at a soiree held by the couple convinces them that Martha's problems must be dealt with by professionals but the film ends with uncertainty as to which direction the young woman is headed for.


Durkin, Olsen (the youngest of the well known sisters) and the film itself have been nominated for several awards and took the prize for best director at Sundance and various breakout nods for the lead actress. The accolades are deserved, as the cast and crew have delivered a film that may look and feel soft and quiet in many ways but is far from soothing and gentle.

As impressive as the movie is in various categories, this is Olsen's flick from start to finish. She excels in a performance where her character comes across as both oppressed but, at the same time, a little creepy. Her mostly hushed behavior makes for a powerful impact in the scenes where she does come unglued. That attractive face may often seem blank but you can't help but wonder what is going on behind it. It becomes more obvious as the film continues that Martha doesn't trust anyone, including herself. Her story has enough missing pieces to keep one compelled to watch further, while also wondering how far gone she really is and where her borders between reality, memory and illusion really sit.

The film isn't perfect - the stereotypical and predictable behavior of big sister and her hubby burden their scenes. There is a little too much concentration on what makes them tick (yawn) and not enough examination of the appeal the cult had to Martha after her mother died and her aunt helped raise her. Durkin rather lazily says to the viewer "Ah, she found this pseudo-family attractive...take our word for it".  The pacing is also a little too unnecessarily slack in some parts. However, the whole question of identity is one that haunts all of us at times...or leads us into delusional states. To watch someone battle with the issue to the extent that Martha does in this psychological thriller makes for gripping viewing overall.