Roulette - Is This Indie Gun Loaded?

The under-the-radar-factor:
This low budget independent production has played at a few of the lesser known festivals where it has won some awards. There has been a DVD/Blu-ray launch with the participation of indie distributor R Squared Films.

Actually, before the review, a question...

In the film world, what exactly do we mean by "indie"?

It's something I've been asking myself. I started this blog last spring with hopes of unearthing films that had been released but remained relatively unknown. Ones that the movie-going public had a chance to see but didn't really bother with. Movies (the worthwhile ones and, yes, that's a very subjective value) that critics and other bloggers ignored or couldn't champion loudly enough, if anyone else cared to listen. The so-called under-the-radar-flicks, ranging from Hollywood studio productions from decades past to more recent genre releases from different shores done on different economies of scale.

Over time, some independent filmmakers (back to that definition shortly) approached and asked if I would review their new releases. Subsequently, I made it clear to others that I was available for evaluating similar projects.

The more I'm exposed to those American films that are old or new but always outside of the major studio system, the more I am confronted by the question of what is an "indie".

Regarding Geoff King's website was a help in this thought process, particularly because he offers his own ideas towards defining the term. It makes for an interesting read and, as King points out, "The distinction between indie and Hollywood is sometimes quite clear-cut, but not always."

It's a subject which requires more analysis in a future post but in helping to frame a discussion regarding the Erik Kristopher Myers feature debut Roulette, I find the most pertinent comments made by King in his piece deal with the notions of form and content.

Indeed, some so-called indie movies are made in an attempt to redefine the aesthetics of filmmaking, while others attempt to spotlight subject matter that would be considered unusual, possibly groundbreaking. This doesn't mean these films are necessarily better or worthier - just different from other "indies".

The Myers film does not highlight cinematic form/content anomalies. It utilizes conventional approaches (non-linear storytelling has become so routine that it no longer counts as thinking outside of the box). It should be appraised in the same way any feature fiction film would be, with...ok...some obvious exceptions that come from being a very low budget production. But that, in turn, doesn't mean it's meant to be evaluated as being the shadow of a Hollywood-type release either - one earnest independent is worth more than several synthetic studio flicks. 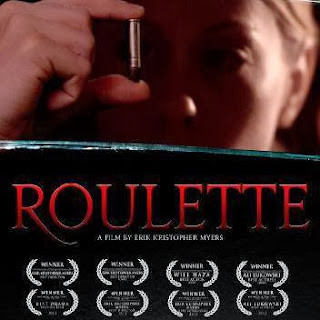 Three suicidal people seem to have broken away from the lager support group they were attending and have retired to the abode of Dean Jensen (Mike Baldwin), where drinking whiskey calls up the nerve to play Russian Roulette. As the taking of chances continues in the present, flashbacks convey the story of how each of these characters has arrived at such desperate circumstances.

Dean is shown as being a once healthy landscaper who began to lose motor functions through an undetectable condition, racking up the bills and straining his married life. The devoutly religious "Sunshine" Howard (aka Sunny, played by Ali Lukowski) survived her mother's attempt to have her aborted, helping to explain her past attitude towards the pro-choice movement. Those beliefs would conflict with the decisions made later in her life, particularly in the aftermath of getting involved with a man and herself becoming pregnant. Richard Kessler (Will Haza) has had his own issues; passed over for a promotion, his already wobbly marriage spiraled further downward as his drinking problem accelerated.

So these three people gather together in the present to taunt each other, drink whiskey like it's soda pop and take a chance on which chamber the bullet resides in as they take their turns in the deadliest of games. But before a final resolution takes place, these individuals learn they have more in common than they could have possibly imagined.

(The folks at Four-Fingered Films want you to know that the trailer may not be suitable for all.)


The strength of the film is in the clever scenario laid out by Myers. His script weaves through the structure of the tale very well, revealing just the right amount of information needed at any particular time. You sense interesting things ahead and look forward to seeing how the saga plays out. Some of his dialogue does run off the page and occasionally hints at fromage but, for the most part, the screenplay provides a solid foundation. The plot is a believable and intelligent one. In a low budget production, this is the filmic element that often stands the best chance of rising to the top and it does here.

Production values are respectable, considering this budget bracket. Along with DOP Jamie Bender, Myers achieves as professional looking a project as circumstances allow. The digital visuals, while a bit insipid at times, usually achieves the atmospherics warranted. I will say that director/editor Myers occasionally lets down writer Myers. Too often the cuts are lazily made on dialogue and at times towards the conclusion the film doesn't come up for air enough, running off the rails the same way Christopher Nolan allowed the films of the Dark Knight trilogy to sometimes get away from him (just to prove that it happens to even the biggest of names working with the largest of budgets). Overall, the Roulette journey seems a tad long and could use some tightening.

The real Achilles Heel of the movie is the acting, which not only becomes uneven between different performers but sometimes even in what is delivered by an individual actor from one end of the tale to the other. Baldwin fares well, staying believable throughout and delivering on his big scene towards the end. Lukowski, at her best in her confrontations with her two drinking/roulette buddies, is least convincing in her uptight religious phase. Haza has his successful moments but at times his hyper-active delivery is painful to watch. This is the area where one would least expect to see cream rising to the top in low budget indie land and, unfortunately, Roulette doesn't provide enough surprises in that space.

As for the conclusion that has been much ballyhooed in the production's publicity material, it will depend on individual viewer reactions. Some may gasp, others will roll their eyes. I found myself doing a bit more of the latter, thinking the freight train had rolled through a little too aggressively. Others may disagree and find the ending and the way it was carried out most appropriate. I will say I may have been more impressed with the movie after sleeping on it. As uneven a film Roulette can be in places to watch, it's still pretty cool to reflect on.

This is an ambitious production done with the resources that it had and while not succeeding in a way to endorse it over some other narrative films available, I'd still recommend this flawed result over many of the lazy and soulless drivel put out by those hogging the multiplex. More than anything I am excited by what the screenwriter might come up with next. Roulette is an interesting story carrying other elements that can't always keep up but Myers defiantly shows the potential of having a solid cinematic future.

(...and any ideas on the definition(s) of "indie" are appreciated.)
Posted by film guinea pig