The Loved Ones: I'm Going To The Torture Prom, Daddy! 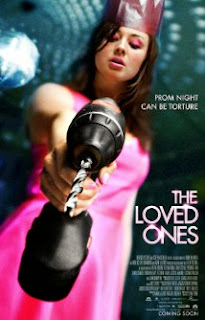 The under-the-radar factor:
This Australian production won the People's Choice Award in the Midnight Madness section of the 2009 Toronto International Film Festival and then commenced a trek onto other events on the fest circuit. Nonetheless, upon regular theatrical release, it didn't do very well regarding commercial business domestically or in the international movie arena.

Pay attention kids...this is how it's done!

I've said it before and I'll say it again - too many horror movies are made by people who are horror fans and not real filmmakers (particularly true of those productions lower down in the budgetary scales)...or by paycheck directors who lack the real expertise and/or spirit to effectively bring out the potential in the genre.

Side note: this fact is sometimes lost on the best of us. I remember one of my York University classes with Robin Wood - the same man who wrote the American Nightmare essays and ran a similarly titled set of screenings one year at the Toronto film fest. Robin informed us that the slasher horror pic he had caught the night before (name escapes me) had a "surprising lack of redeeming value" to it. We students pointed out to this respected cinematic scrutineer that more than likely that was because, in the horror genre, they often make intentional pieces of shit! (Robin was a great intellect but also a stubborn guy who read meaning into all kinds of things - you couldn't tell him that, sometimes, a cigar is just a cigar. Anyway...)

Brent (Xavier Samuel) is still grieving over the death of his father in a car accident in which the son was driving. Still, he's a teenager with raging male hormones and does have a diversion most boys his age would kill for - the loving Holly (Victoria Thaine), offering quickie sex in her car while really longing for a deeper relationship with him. She is of course the only logical choice to be his escort to the big school dance but that's not the way Lola Stone sees it. This outsider (played with gusto by Robin McLeavy) doesn't accept Brent's rejection of her invitation to be his prom queen.

While Lola may be an outcast at school, her father (John Brumpton) sees to it that his "princess" gets whatever her heart desires. Before he knows it, Brent has been kidnapped and brought back to not-so-stately Stone Manor, where the pseudo-prom plays out to the horrifying hilt!


One of the things that really impressed me is how layered The Loved Ones becomes as it proceeds. The more disturbing moments are going to be difficult for some to sit through but Byrne often displays the Hitchcockian touch of making you squirm and laugh, almost at the same time. A sub-plot involving Brent's pal Jamie trying to score with the school's hot goth Mia (Jessica McNamee) provides comic relief when needed; at the same time it's obvious all is not well with her character and eventually it becomes clear how that fits into the circumstances of the rest of the film. Suffering rears it's head in other ways as well. Brent may be using sex with Holly as an anesthetic for the pain he feels about his father's death but the markings on his body before Lola even gets her hands on him reveals the personal torture he is already under.

The acting is top notch, especially from the sicko Stone family side. McLeavy and Brumpton do a great job at making synchronous sinister sneers for the camera; at the same time they make it clear how they've allowed themselves to be so pathetically isolated. We may not sympathize with them but we understand the world they've tried to put together for each other. It's amazing to see Lola go from her fairly typical teenage girl pink bedroom to the hell pit outside that door. What also makes the film work is the fact that she is actually a very physically cute young lady, which sends the movie into the realm of a teenage romance story that has gone bonkers.

The film's production values, while on an indie scale, are exceptionally good. And the film has been well received by those few who have seen it, with the Tomato Meter flying off the charts. So why didn't The Loved Ones make a bigger splash at the box office in this age of Saw-gore success? Is it that people aren't as scary and creepy when they speak with Aussie accents? Am I getting closer to the truth when I'm speculating that it may be because this time out it's a female inflicting the physical pain on (as we discover) a number of males?

Perhaps the film flirts with the sensationalistic a few times but that's pretty much par for the course in this territory; on balance I have no major criticisms here. If you never thought you would be interested in seeing a torture-fest of a film but might be willing to try one, pick a selection where the talent rises to the top the way it does in The Loved Ones. (Mr. Byrne, another film? Soon? Please?)