Upside Down is too Topsy-Turvy

The under-the-radar-factor:
Limited release in North America in the spring of 2013 resulted in box office peanuts.

Just because you can doesn't mean you should.

No doubt there's things that can be done now in the cinematic sphere that would have been unheard of a few scant years ago. CGI allows us to create new worlds in the fullest sense, and that possibility is taken to the extreme (and here, I mean that pejoratively) in the Juan Solanas fantasy-romance Upside Down.

Describing this film is going to take some patience on both our parts, but here goes... 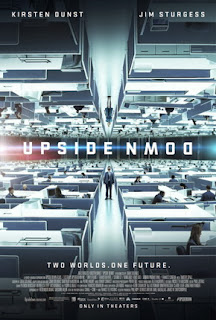 Two worlds exist in a synchronized orbit, one on top of the other, with gravitational fields pulling in opposite directions. The inhabitants of both planets speak English, use our types of technologies and pretty much resemble our Earth in most ways. Their upper world, however, is where the big cheese types call the shots; people live in beautiful homes in lovely neighborhoods and work under the best of conditions. These people cannot "rise down" to the lower world, a bleak, dirty environment which has been thoroughly exploited by the planet above. These cellar-dwellers ring out marginal existences and gravity doesn't allow them to "fall up" to the oppressor world. People from either sphere are not suppose to have anything to do with each other but two smitten kids named Adam and Eden (yeah, you read that right) have managed to climb mountain peaks on both globes that allow them to physically connect - until the day that interplanetary border troops discover their dangerous liaisons.  The ensuing commotion sees upper-world Eden injured to the extent that she suffers amnesia.

Fast forward ten years where Adam (Jim Sturgess) notices a tv program in which adult Eden (Kirsten Dunst) appears. She is working for Transworld, the gigantic corporation whose humungous tower connects both planets but with workers segregated above and below the main floor. Adam, using a anti-aging recipe based on something he learned from his aunt, convinces Transworld to employ him as he attempts to get close enough to Eden to try to jar her memory.

Best you have a gander at the trailer to fill in the blanks...


Visually, as you can see from the clip, Upside Down astounds...but you could have been given a convincing look at this fantasy world in an entertaining ten minute short.  Instead, we're asked to sit through an additional ninety minutes of what Solanas has to offer and frankly I feel like I took a cinematic bullet for you guys so you don't have to watch this dredge. A wonderful concept, stillborn from the start.

Right off the bat, you can't help but ask certain questions - why no back story at all as to how these worlds developed as they did? Why is everyone in the lower world so passive and not willing to stand up to their oppressors in the least? Are all the the folks in the upper world totally heartless? But in spite of the one-dimensionality of the story telling throughout, I still held hope that Upside Down would at least offer a feel-good romantic diversion worthy of some recommendation...

...but that's when the last ten minutes of the film showed up. And that's when the plot moved from silly to ludicrous.  With no semi-rational means available to tie things up, every lazy and ridiculous explanation is dropped in from the sky for the sake of concluding this mess.

Likeable performances from Sturgess, Dunst and veteran Timothy Spall (whose teeth help offset the empty beauty of the upper world) are as wasted as the incredible visual panache surrounding them. I'm a sap for a half-decent romance so it tells you something when I say this film almost doesn't deserve being reviewed, let alone watched. A Canadian-French co-production, this is the opposite of some music videos where the vid sucks but the song is hot - here, it's a travesty that there wasn't even a half-baked story line to insert in such visual splendor. Upside Down has a delicious looking shell around it but, filling-wise,...