Yesterday Was A Lie (but today, it's a movie review...)

The under-the-radar-factor:
"Produced on a micro-budget of $200,000 by a non-profit arts foundation" type feature that won several awards at a number of niche and smaller film festivals.

Warning: I'm coming at you from the right side. Duck!!

Right vs. left hemisphere brain characteristics is something dwelled on at great length in James Kerwin's Yesterday Was a Lie. Personally, I've been thinking there is a conspiracy taking place on our poor planet to produce a number of left-side individuals who are both programmers AND programmed  - that people who think in these linear, analytic terms are easier to manipulate and such "tree" watchers" keep their antennas from emerging and regarding the true realities in the society around them, as opposed to us more sensible "forest" lovers.

(The truth is I'm probably just jealous and ashamed of being severely math challenged and have also heard people question on occasion whether either sides of my cranium are operating at all. By "occasion" I mean from about seven in the morning till eleven at night. Anyway...)

Seriously, there is a considerable amount to digest in Yesterday Was a Lie from both the thinking, analytical direction, as well as the touchy-feely, conceptualizing mode. Before trying to break off into the different streams, let's arrive at a synopsis that can pretty much sum things up for all:

We first meet Detective (or is she a P.I.?) Hoyle (Kipleigh Brown) on the couch of her shrink, going over the details of a dream she has had regarding an elevator ride and a doppelganger from another time period with a warning about choices made and second chances. From here, an off-screen narrator introduces the viewer to some Jungian thoughts regarding "absolute knowledge", the kind that is usually overwhelmed by the conscious mind. Hoyle turns out to be on the search for a notebook associated with a pained genius named Dudas (John Newton), who she has shared more than some theories with. His work - along with some other highbrow concepts, including a liberal dose of T.S. Elliot - help to explain what Hoyle begins to experience; shifts in time and perception, where she is really not sure if she is coming or going and what, for that matter, is real anymore. 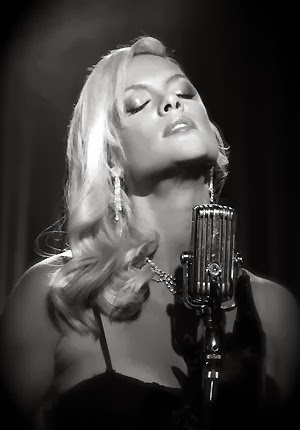 Along the way she also encounters a sexy lounge singer (Chase Masterson) who helps introduce Hoyle to some of the alternate ways of viewing things that start coming up; balance is important (like in the making of a good Manhattan cocktail)...sometimes things don't fit smoothly together..."God's chess game"...causality and free will...surrealism and the unconscious mind..."sometimes it's the rough edges that make life interesting"...and so on.

Hoyle starts repeating experiences in different ways and at different times. She seeks out expert opinions and receives information regarding fenestra aeternitatis (Google it), mathematical formulas, and get's a wound from a gun shot (or did she simply faint?). But who was she talking to? At what time? Bottom line - is Hoyle going crazy?

Okay, it's getting complicated, right? So I lied. A film with this many ideas and plot devices running through it is difficult to describe. As far as the real deep analytical aspects are concerned, there are enough folks out there willing to go over them so, by all means, indulge. For what I thought...hmm...watch the trailer first and I'll be right back...


First, a few remarks about the look of the film. Yes, it's obvious it was filmed on a low budget...which is not the same as saying it has a low budget look. Originally shot in color HD and desaturated accordingly, the atmospherics attained by Kerwin and DOP Jason Cochard are often breathtaking. The filmmakers have taken the means they have available and brought it fully under their control, rather than letting their resources control what they could achieve. For a film which often plays with the notion of "dream time", the look is entirely appropriate. I do not exaggerate how impressive the atmospherics are.

As far as the contents of the non-linear storytelling goes, Yesterday Was a Lie does often come across as both pretentious and hokey in the same scene. Some viewers may end up shaking their heads,with others scratching them. Perhaps there are three hours worth of concepts jammed into half the time needed (don't call this movie "padded"...more like "bulging"). But this is an age where dumb-downed product increasingly prevails (and cinema is losing cred to the third golden age of television). This film's cerebral ambitions felt most refreshing, even if more than one viewing is required to grasp everything that's going on...and I'm up for that! I enjoyed the mixture of artifacts of different eras - rotary phones calling modern answering machines; old school typewriters in one scene with snazzy computers in another. Memories competing with per-cognition. The food for thought was more stimulating than exhausting.

There is a flaw that comes rather close to being critical and I'm afraid it's in the casting of Brown in the lead role. Right off the bat, it becomes obvious that she just doesn't come across as what's needed as a hard drinking gumshoe type. In the production's press kit the director is quoted as saying he was thinking of a Bacall-in-Bogart's role vibe for the central character. Well, I'm not saying she'd look more at home with a glass of warm milk than bourbon but Brown is just not up for it. Also, the fact that Masterson and Newton carry their roles very well intensifies the shortcomings regarding the lead's rather lightweight performance.

Still, I very much liked this film. It's sexy, atmospheric, alluring, challenging, and rather original. When I started this blog several months ago my hope was to discover movies like Yesterday Was a Lie. It may be a niche kind of offering that wouldn't fit the tastes of many in the mainstream crowd but it seems to be a project with passion behind it. (I've read somewhere that Masterson got her producer credit for both stepping in as an angel investor at a needed moment, as well as when a line producer took a powder ...and I'm sure no one got rich on this job, or expected to.)

Let General Zod and Superman bounce each other off some more buildings in the increasingly predictable mainstream world for all I care - I'd rather see the offerings that talented, emerging filmmakers like Kerwin have to offer.