American Bomber Hits Most Of It's Targets 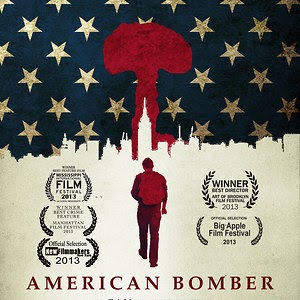 The under-the-radar-factor:
Low budget independent production is being released on VOD and DVD by IndiePix Films. The movie has picked up a few awards at a couple of lesser known  festivals.

A dishonorably discharged veteran agrees to become an American suicide bomber but romance and FBI surveillance may change everything in Eric Trenkamp's feature debut American Bomber.

The life of John Hidell (Michael C. Freeland) is recounted in mock documentary fashion in the early portion of the film. Accounts from his mother and others who knew him conflict; some seeing him as a good egg, others describing ill temper and violent behavior. Abuse seems to have been an element in his life borne outside and inside the home. It's made clear that John reacted badly to the news of the death of his half brother, leading to an internment in which he was exposed to the thinking of the persuasive Barry Aaron Speiler (portrayed in a enthralling manner by Kenny Wade Marshall). 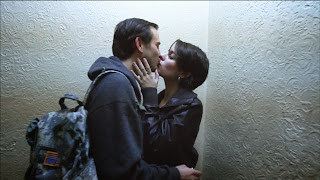 Upon his release, John discovers employment doesn't come easily for a disgraced solider who will undergo background checks. Distant from the remaining family he has, he commits to the ideas of Speiler, a pseudo-brother teacher that has filled the void John feels. Hidell heads on a one-way trip to NYC with a wad of cash and a backpack full of explosives, determined to enjoy what he can in the last few days of his life. His big city contact puts him up for accommodation in the same building as an attractive bartender named Amy (Rebekah Nelson), who bums cigarettes and charms the troubled vet.  With her days as free as his, they spend afternoons together and become closer. As the scheduled time to take action comes nearer, John can't help but feel the possibility of a future with Amy, while also suspecting that he has already been detected by law enforcement officials. His conflicting feelings leads to a violent act that solidifies his status as a fugitive, jeopardizes what he has with his new woman and narrows the choices left to him.


The last indie fiction film I had reviewed prior to this one was Roulette, often displaying the opposite strengths and weaknesses of American Bomber. While that film came charging out of the gate and immediately demanded attention, Bomber takes it's time in setting up it's story and involving it's audience. While Roulette displayed fully developed characters, the real nuts and bolts behind the thinking and feelings of Hidell are never fully explored in Trenkamp's film.

On the other side of the coin, while it was clear Roulette had some technical competence, it also displayed unevenness in the level of acting, as well as some occasionally insipid digital imagery. American Bomber quickly shows a production value level substantially up from most films at this budgetary level with it's sharp cinematography and crisp editing. Also importantly, the acting skills become more impressive with the introduction of each character. While Freeland only achieves a status of being "ok" in the lead role, Nelson really commands the screen whenever she appears and Marshall has some impressive moments, especially delivering a mind-blowing "God is a farmer" monologue towards the end of the film.

There are other strengths as well; among them, a soundtrack that legitimately enhances the mood of scenes, rather than trying to force the viewer into what they should be feeling. The sound recording and editing is also done at a consistently high quality level. And the examination of the surveillance state the U.S. finds itself in post 9/11 times brings out the best and the worst of that culture; the fact John is spotted as quickly as he is upon arrival in the greater New York area could be seen as both reassuring, as well as unsettling...or creepy.

While the first half of American Bomber shuffles along without any sense of urgency, the last 45 minutes of the film becomes highly involving and makes the total effort worthwhile. I also like the fact the conclusion played out in a straightforward manner and left contrivances for other filmmakers who try to substitute being clever for being intelligent. While not perfect (even I'm not that), American Bomber has a lot going for it and I feel confident in recommending it to audiences looking for a solid indie offering. Also keep you eyes open for Rebekah Nelson in the future ... coming across here as charming, sexy and intelligent, she has real potential.