One Week Is Too Long To Describe This Film

The under-the-radar-factor:
Given a release in its native Canada in the spring of 2009, most exposure in other markets has come via DVD.

The plot's easy to describe, since there's hardly any...or does that make it more difficult? Let's see...

(BTW - Helping to stitch the scenario together is an overseeing narrator who turns out to be voiced by actor Campbell Scott. This gives the movie a quasi-documentary feel throughout.) 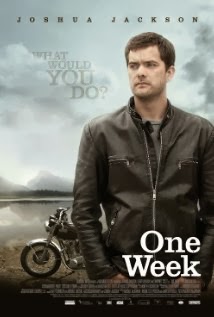 School teacher Ben Tyler (Joshua Jackson) learns he has an aggressive cancer that's already hit stage IV and needs treatment pronto. He's not thinking of calling off his nuptial vows but fiance Samantha Pierce (Liane Balaban) is more concerned with Ben delaying his therapy to seek out one last adventure. Serendipitously coming across someone looking to sell his motorcycle, Ben is on the chopper and heading west before you can say "Trans-Canada Highway". He stays in touch with Sam but keeps putting off his return to Toronto, one day after another. He sees the sights of each province's roadside wonders (world's biggest nickel coin over here, world's biggest hockey stick over there), meets a couple of befriending women and reflects a lot...and then reflects some more. With fewer days in front of him, most of his questions are nonetheless about his past - one bereft of achievements and filled with excuses and detours. For the most part, Ben has pushed aside some dreams and is finally living life before it actually ends. This has big time implications for his relationship with Samantha, which does get put to the ultimate test before he finally returns home and eventually manages to pull off a long delayed creative goal


Considering it's a film about a person who's dying, One Week is hardly depressing , nor is it particularly invigorating (or, for that matter, convincing about how ill Ben is suppose to be). Then again, it's not Hollywood overdone either. Some would say that makes it Canadian right down to the bone. And to a great extent the real star of the film is the country itself, shown for all it's lush beauty and oh-so nice inhabitants...and visitors. (When Ben hits his final part of the journey and is about to go surfing in the Pacific, a German couple remarks that he lives in one of the most beautiful countries in the world - his modest, non-rotomontade response is appropriately Canadian). The film goes from Tim Horton roll-up-the-rims to a cameo by Gord Downie of that national-treasure-of-a-rock-group The Tragically Hip to the Stanley Cup itself showing up in a hockey rink. Narrator Scott also delivers a steady stream of Great White North facts and figures. There are a plethora of moments that will have Canadian viewers saying "beauty, eh?!"...and others exclaiming "WTF was that all about?!" One Week is not a film about Canadians - it's a film FOR Canadians. I don't know what Americans consider to be the quintessential movie to watch on the Fourth of July but this flick should be mandatory viewing on July 1st for anyone living above the 49th parallel.

So what does this movie hold for non-Canucks? The beauty of the scenery can be appreciated by all and is allowed to be absorbed in appropriate doses. Actually, the pacing of the film on a whole is quite good, with characters and experiences encountered by Ben going on for no longer than is needed. Jackson's sleep-walking type performance suits his character well....which is not to say his character is what suits the story well. While one can understand the guy being in a tizz over dying, the aimlessness of his journey and indulges he allows himself start coming across as being somewhat selfish. Balaban's Samantha is a bit pushy but ultimately sympathetic - after Ben decides dying is an excuse for some indiscretions, you end up feeling more sorry for the loyal trooper she is than the shallower flake he turns out to be.

One Week is not an unpleasant film - it's actually "nice" in the way much of the world finds Canadians "nice", if (rightly or wrongly) not particularly memorable.

Some people regard going to church every Sunday as a duty. Perhaps it's a duty that all Canadians watch One Week...preferably on July 1st. The rest of you, while you may enjoy this calm, light (some would say slight) ride of a movie, are off the hook.
Posted by film guinea pig