The under-the-radar-factor:
A remake of the 2010 movie La casa muda, this version grossed close to $13 million in the U.S.A., respectable for a production rumored to have been budgeted around $2 million but far from making it a household name.

Alfred Hitchock's Rope pulled off the illusion of it; Alexander Sokurov actually accomplished it with his historical fantasy Russian Ark. Mike Figgis took it to total extremes with the 2000 movie Timecode. The idea of constructing a feature film storyline using one continual take (or the appearance of one) in real time is arguably best illustrated by the above examples. Silent House, the horror/psychological thriller flick by the Open Water filmmaking couple of Chris Kentis and Laura Lau (sharing the director credits here), will not be a quality example of such cited by film historians in the future. While the long-take-that-never-ends artifice is done convincingly enough, it carries a storyline whose strong conclusion does not make up for the tiresome meanderings preceding it. 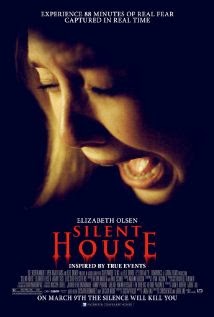 Sarah (Elizabeth Olsen) is helping her father John (Adam Trese) to fix up their vacation property that's going on the market. It's a large, expansive property in the middle of nowhere, but while perfectly set up for creepiness, all looks normal until a young lady professing to know Sarah drops by for a chat. The mystery girl's presence sets off a chain of strange goings-on after her departure.

Uncle Peter (Eric Sheffer Stevens) also shows up to lend a hand but has to leave to obtain help for some maintenance issues the house has. Shortly after, Sarah starts hearing noises; she and the father head upstairs to investigate. The only strange discovery at first are some Polaroid photos dad doesn't want her to see, but soon after separating Sarah hears the proverbial bump in the night, alerting her to John being is danger. In short order she finds all the exits to the house seem to have become locked or sealed. Upon detecting someone else being about, Sarah finds her severely injured parent. Uncle Peter's return doesn't end the mysterious goings on. The rest of the film depicts Sarah's attempts to avoid detection from whoever is there and finding an escape route, while the audience is finally exposed to the answers that bring sense to what has literally been madness.


This looks like a fairly traditional scary house flick for the first hour (which drags) but then starts doing an abrupt turn, which obviously can't be discussed here. The ending has a big payoff on some heavyweight issues. It reaches higher than most in the horror genre - or at least it makes its aims more obvious and less subtle than most - and some credit is deserved there. However, many will also feel misled by the previous goings-on suggesting dangers that weren't, as it turns out, really present (not that they were that frightening to begin with). Kentis and Lau roll the dice that the conclusion will make up for the uneven activities before it. Maybe they should play with better dice and blow harder.

As far as the continual one-take bit is concerned (the cinematography carrying it is excellent and atmospheric), there are strengths and weaknesses to the approach. While the viewer at times feels as trapped as Sarah, there are those aforementioned tedious moments where we can't help but wonder "isn't there something more interesting going on somewhere else?"

Olsen more than proved her acting chops in her breakout role in Martha Marcy May Marlene and it's a good thing she's on board this project - without her layered performance this thriller without many thrills would be even more tedious than is the case. The one-take gimmick means the viewer is forced to follow the main character throughout and a lesser actress would have made the journey a wearier one. She doesn't come across as your typical scream-queen, as her thinking-person victim makes for some intrigue - her dad and uncle are less interesting than paint drying - but ultimately Olsen's talents are wasted here.

In the end, Silent House is an experiment which doesn't turn out successfully enough to recommend it to anyone other than those who comb through the horror genre regardless. And while it's interesting to see her experiment with roles, one hopes a talent like Elizabeth Olsen's can become more selective. She's too good to lose to mediocre material like this too often.