The Exploding Girl That Simmers

A young woman who can't clue in that one relationship is ending while another could be had is the subject of Bradley Rust Gray's film which, in spite of it's title, moves in a very slow and quiet manner throughout. 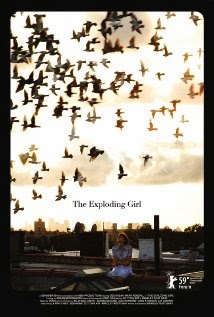 Kazan (granddaughter of Elia) portrays Ivy, a college girl who heads back to NYC to stay with her mom for the summer. One wonders why - the parent is so busy teaching dance classes and socializing that she rarely has a moment for her daughter. Fortunately, Ivy does have the company of old friend Al (Mark Rendall) who has accompanied her back, only to discover that his room at home has been rented out. Having stayed over at Ivy's before, it's not an inconvenience for them to have him crash out on their couch. Al provides a partner to share lunches, play cards, attend parties and regard baby pigeons with... and it would be obvious to anyone - except Ivy - that he's sporting a crush on her. It would also be apparent to the rest of the planet that Ivy's long distance college boy friend - taciturn when he does bother to return calls, which is not often - is moving towards ending their relationship. Once he finally delivers the official news to her, the numbed Ivy has a particularly difficult time getting focus back in her life. An epileptic prone to seizures when feeling stressed (part of what the "exploding" in the title refers to, as well her quieter inner turmoil), she has to deal with this oncoming assault on her physical self, as well as the new emotional challenges in front of her.


Some films go really big, others small. The Exploding Girl is not a loud noise of a film, nor one microscopically analyzing details to discover the essence of anything. It tries to examine someone's world on the same scale as life itself. Gray's camera stays at a distance to respect the plight of his characters. The soundtrack is not jammed with aural influences. The pacing is leisurely and there are long periods where nothing eventful occurs. This is not a film which finds an ordinary character in extraordinary circumstances or a towering figure in their own distinct one-of-a-kind existence. This is a film about Ivy, a typical student on summer break who could have been any person you walked past earlier in the day. There's no doubt that this will not appeal to those looking for something more plot driven with more things "going on". In that case, by all means, look elsewhere but...

This is a rewarding experience in many ways, first and foremost because of the performance of the undeniably talented Kazan. The camera is with her for practically every single frame and she makes her character's modest, predictable life absorbing. You believe less that you are witnessing an actor and more that you are watching a real person ready to walk off the screen and sit beside you. The director seems to know that the best thing to do is just get out of her way and let her go. I wasn't as impressed with Kazan in Ruby Sparks (that was more of an issue with her as screenwriter than as an actor) but here, she won me over from the start.

Gray, who I am sure knows he's not out for the Michael Bay crowd, still doesn't try to press his luck with the viewer's patience - clocking in at less than an hour and a half, The Exploding Girl is at just about the right length for it's beautifully shot simple study of a simple situation.

You could say of this film "That's what indie is all about!" One person could respond with "Yes, isn't that awesome?!" and another with "Yes, isn't that the painful truth?!" Maybe they'd both be right but I give this effort a round of applause and thank these folks for letting me spend 8o minutes of Ivy's summer vacation with her. Recommended for those who would like the idea of sitting on a rooftop and watching the pigeons fly by.
Posted by film guinea pig