The under-the-radar-factor:
An independent UK feature that has been on the festival circuit, has won some prizes and is slated to appear on the American Online Film Awards with secure streaming access for two weeks in May.

"It seems that most guys that I run into who are making digital films are just auditioning to get to Hollywood...to make "that" stuff. (He shrugs) It's kind of weird...you have the opportunity with this gear to do whatever you want. What are you waiting for?"
-from this interview with underground film legend Robert Downey Sr.

"A lot of people are using DSLR cameras...because they allow a lot of democratization of moving images...they provide opportunities that don't exist with film...instead of trying to use it to look like previous films, we take it and we try to go somewhere new..."
-from an interview with Benny Loves Killing director Ben Woodiwiss.

Mr. Downey would be very happy to know that Mr. Woodiwiss followed his suggestion and then some with the British filmmaker's impressive feature debut being proof. 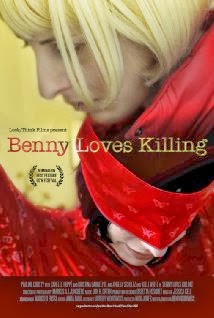 Benny (Pauline Cousty - after this you'll remember the name) never met a line of coke she didn't like. It's what she goes for the instant she experiences the least bit of stress - and she seems set off by ANY dilemma of ANY degree that comes her way. Benny complains about the condition of her mother's home even though she has own hygienic challenges. She expects academic funding for her horror film project even though she's going directly against the rules for her particular curriculum. She'd rather avoid mom's place and try to crash at the pads of semi-strangers, even when leading to eventual rejection or unwanted sexual advances. She has no use for other's views but complains no one is listening to her. She wants folks to trust her, even though she knows she's untrustworthy herself. Benny has issues that seem to be of her own doing. Perhaps. She leads a life that's easy to describe but not to understand, which is one of the challenges (and strengths) in watching this film.

The main protagonist is a French ex-pat in London. Her mom is there too, arguably more troubled than Benny, still addicted to heroin and insisting that she and her daughter are very much "the same person". This seems to have been one of the incentives for Benny to lift some different colored wigs from one of the places she has crashed at - she tells her filmmaking partner Alex it's like being a whole new person. The only thing she does easier than change her hair color is to break into people's homes, where she steals stuff to fund her drug habits and fill her grocery bag. But no matter what appearance she takes, Benny can't stop the same reoccurring dream from taking place - the one with the haunting voice coming from the other side of a door that always has her waking in a cold sweat. Her filmic endeavors...and her ominous sleep experiences...continue until there is a resolution, of sorts, with both.

Benny's character, in explaining her rejection of the use of a POV shot in the horror film she's directing, states "You sympathize with who you're looking at, not with the eyes you're looking through". And for all her illogical, erratic behavior, you end up feeling much of what Benny goes through - sympathetic with her to a degree and always never less than fascinated by the world she has made for herself.

Woodiwiss aims for being original and has done so to a great extent but, for a point of reference, there is a clear similarity in the look and feel of this film to the work of the Dardenne Brothers and, in particular, their critically acclaimed Le Fils. (It would be interesting to count which film had more back-of-the-head shots - in this one, it's predominantly male scalps being inspected.) The point being that, as with Olivier Gourmet's performance in the D-brothers flick,  the camera crowds into the face of the main protagonist (who is in every moment of the film) in such a way that any false sense in her portrayal of this troubled, multi-layered character would show up in a split-second. Cousty doesn't disappoint - her amazing eyes tell more than spoken words ever could and she gives Benny a verisimilitude in both her troubled real world and haunted dream states that is entirely convincing. It's fascinating watching her break into people's homes in a calm manner - even taking time to play with pets - but become unglued when the least provocation - real or imagined - confronts her elsewhere. The rinse-repeat cycle of snort-steal-lie would have become tedious in lesser hands - Cousty never allows you to take your eyes away from her in this captivating performance. (Kudos also go to Canelle Hoppe in her short but demanding appearances as Christine, the tormented mother.)

Technically, the movie is highly accomplished. Taking full advantage of DSLR mobility, Woodiwiss and DOP Markus A. Ljungberg take the viewer through different rooms of homes as if going through different chambers of the mind. And the care/attention to sound recording and editing goes beyond what one would expect in many productions with higher budgets - the echos provided by the clock in the mother character's home suggest both an anchor in reality and an eerie other world quality. This attention to visual and aural detail never lapses and, rather amusingly, contrasts to the slapdash, inept way the Benny character is trying to assemble her film-within-the-film. I was watching and waiting to see any stumbles in the movie as a whole but, while the pacing may be a matter of taste and some scenes may seem repetitive to some, I felt Benny Loves Killing felt genuine throughout. The character's explanation of her world towards the end of the story, in regards to the connection to the reoccurring dreams she's had, could be seen as either a shortcoming on detail or a necessary ambiguity to further challenge and involve the audience in the whole process. Depends.

I have been asked in the last several months to look at a number of independent releases and Benny Loves Killing is the most accomplished of these works. I'm excited to see what Woodiwiss and Cousty come up with next - in the meantime, they can both be very proud of what they have done here.