The under-the-radar factor:
The movies of Bobcat Goldthwait as director are not known for receiving heavy marketing pushes and raking in big box office bucks and this film was no exception. Despite respectable notice from the critics, the fim scored less than $1 million at the domestic box office.

If being a perfect, thoughtful person is scored as a 10 and the total scum-hole of the universe a 1, a lot of us are bouncing on the scale between 4 and 6, give or take a point or two on good and bad days. World's Greatest Dad is the story of someone whose public perception goes from rock bottom to saintly at the hands of the person who knew him best...and is now in line to benefit the most. 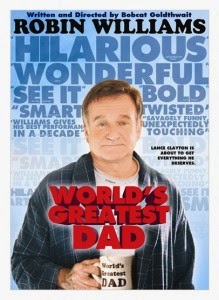 Kyle Clayton (Daryl Sabara) is an insensitive and selfish turd, the exact opposite of his kind, gentle father Lance (Robin Williams), left alone to try and raise the problem child. The senior Clayton teaches an unpopular poetry class at the same high school attended by his son. His closet lover Claire, the art teacher (Alexie Gilmour), should be taking Lance's mind off his woes but actually starts rubbing salt into the wounds of his psyche. Claire has been noticing the success of the attractive male English teacher who's just had an article appear in The New Yorker, contrasting with wannabe author Lance's piling publisher rejection slips for his latest book. Meanwhile, potty-mouthed Kyle is trying his best to disrespect his dad and alienate Andrew, the only school mate who will spend any time with him. The son takes his porn addiction to a new level (and it's as extreme as it gets), leading to tragic results which, ironically, become the means for his father to finally establish himself as a brilliant, sensitive writer...or, at least, as circumstances dictate, a brilliant, sensitive ghost writer.


You may now relax and breathe - this film features none of Bobcat Goldthwait's trademark goofiness from his Police Academy performances, nor the lazy paycheck entries that has made Robin Williams' former fans squirm for more than a decade. You'll almost feel like you have landed in a high school across town from the one in Alexander Payne's Election. Like that wicked satire, this is biting, blackish comedy from the word "go", with all the outside trappings of the mainstream but a let-no one-off-the-hook interior in examining celebrity culture. Great credit goes to Williams, delivering a performance with depth in a neglected film that would help take the bad taste out of moviegoers mouths from the dredge they have noticed him in lately.

Preceding Goldthwait's God Bless America by three years, World's Greatest Dad has more polish and a subtler bite, although there is an annoying lull in the last half hour as actions and reactions to the situation surrounding the Claytons become rather predictable. Still, it's a highly effective piece of work overall, serving ugliness and sweetness in fairly balanced doses in what most regard as Goldthwait's best film to date. Between tackling bestiality (Sleeping Dogs Lie), killing celebrities (God Bless America) and the elements in this film, Bobcat is becoming somewhat of an "event" filmmaker. Go figure.
Posted by film guinea pig