Rubber - A Film I Liked...For No Reason

The under-the-radar-factor:
Movies about car tires (in this case, one named Robert) who not only become sentient but develop awesome telepathic powers to boot never seem to have taken the multiplex box office by storm. Neither did this one - its haul in the U.S. theaters came in under six figures.

First, before going into the main course of the analysis of Quentin Dupieux's rather outré feature offering, I would like to serve up one of the best appetizers I can think of to set you in the right frame of mind for what will follow. I propose we take five (actually, eight minutes) to regard the amazing and deservedly legendary short by the great Norman McLaren of National Film Board of Canada fame. For those who have never seen it, and those who wish to relive the magic...Neighbours.

Now, I'm not trying to suggest Rubber is on the level of this masterpiece or that Dupieux is the next McLaren... but while I was watching 82 minutes of a car tire coming to life, I thought of Neighbours and believed the great Canadian animator would have enjoyed this 21st century cinematic experiment very much. 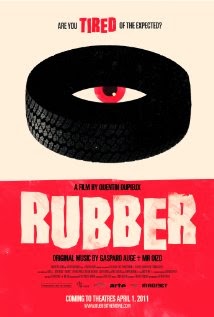 We've all seen films-within-films but this one goes a step further. At the start a police officer named Lieutenant Chad (Stephen Spinella) pops out of the trunk of a car that's arrived out on a desert road to seemingly talk directly to the camera (we, the audience) about things in films and life that were done for no reason. (Examples: "...in The Pianist, by Polanski, how come this guy has to hide and live like a bum when he plays the piano so well? Once again, the answer is... no reason!" Also... "Why do some people love sausages and other people hate sausages? No fuckin' reason!") But it turns out there is another layer to this monologue - Chad is actually talking to a group of several people standing before him who are there to watch this "other movie" play out - a film that is a homage to the "no reason" - even though there is no actual film but just action taking place in the distance. The group members are given binoculars by an accountant figure and they use the optical aids to regard this third movie unfold. (Still with us?...)

What the spectators see in the title universe of these goings-on is Robert the tire awakening in the desert, taking his first baby steps...eh, spins....and later discovering he has the ability to make birds, rabbits and people blow up. Robert heads out on the highway where he comes across an attractive young woman named Sheila (Roxanne Mesquida), who he obviously becomes smitten with. The tire follows the girl to a motel where he takes over the room next door, watching television, spying on her in the shower and blowing up members of the staff. Meanwhile, the spectators in the distance comment on the proceedings before them, unaware they may be in danger from the nerd accountant. (I know you're going nuts reading this but I'm having a lot of fun writing it.)

Of course there are inevitable showdowns for all involved but anything else written here will lead you into an even more confused state, so I think it's time to regard the trailer, don't you?


This is not a review begging everyone to give this film a chance. Needless to say, a lot of folks will feel like they just can't be bothered by a premise this silly. Some will criticize the movie as padded (not deserving much more of a running time than, say...Neighbours?), and won't share the comedic tone established by Dupieux. Some could also be a little offended by what may appear to be an attitude of contempt directed at movie audiences in general and the horror crowd in particular.

On the other hand, if elongated Python-type absurdity is your bag, combined with a really well-executed look and sound that this film has...and if you are just tired of the usual mainstream paint-by-numbers predictability that we are surrounded by, Rubber could be the fresh air you seek. It may be true that someone can appear outré only by looking slightly less middle-of-the-road then the 99.9% of everything out there but in the case of this Dupieux offering we are really talking about something from another planet. As much as Rubber is preposterous it does not run amok - the deliberate pacing, exceptional framing of Robert in shot after shot and the lack of CGI technology (a puppeteer was used for much of Robert's motion generation, with some remote control augmentation) creates a very organic feel that demands that this absurdity be taken with some seriousness. This is where I see the closeness to what a genius like McLaren would do in a film like Neighbours. Also contributing to the feeling of verisimilitude embedded in the off-the-wall actions is the talent of the cast, hitting the right notes at the right time, regardless if sincerity or tomfoolery was required in a scene.

One of the things I also like about Dupieux is his embracing of the DSLR technology that's out there in a way that explores new possibilities rather than create pseudo-Hollywood-on-a-budget entries. It's a call to arms that I've heard expoused by Robert Downey Sr. (regard the beginning of this video interview) and seen followed in practice by people like the UK filmmaker Ben Woodiwiss - the look of the movie and the manner in which it explores physical settings suggests an expert control over the components in use.

Oh yes - even thought the film is a bit uneven and occasionally drags, it's funny. Often very, very funny.

Rubber is a film which will extract polar opposite reactions - for myself this was one of the more enjoyable pure cinematic experiences I've had in some time.
Posted by film guinea pig