The under-the-radar-factor:
Seriously, have you heard of it? Then you're one of the few.

Two aging sisters hoarding junk in their rural mansion are disturbed to find a young girl compulsively knitting a wool sweater and refusing to leave their abode in Mai Tominiga's bizarre but interesting 2006 feature. Combining live action with animation, puppetry and anything else the Japanese filmmaker can seemingly get her hands on, Wool 100% is a difficult film to describe but a mostly fascinating one to watch. 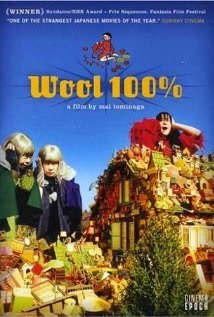 The film starts with a "once upon a time" narration making the work to follow sound like a fairy tale and, in many ways, Wool 100% does maintain that quality...among others. The story itself begins in a droll manner, reflecting the mundane daily routines that Ume (Kyoko Kishida) and Kame (Kazuko Yoshiyuki) go through; rise, have breakfast and then head into town to see what discarded items with be accompanying them home. One person's junk is another's joy, as the women clean, catalog (they give their new possessions names) and illustrate the numerous items that have been collected in the many rooms of their cluttered palace, as well as on the lawn and roof outside. But one acquisition brings with it more than what was bargained for. A collection of red wool balls leaving a trail of yarn behind them seems to have attracted a disturbed young girl to their place. She sets up shop in the middle of their house and knits away at a sweater for herself, which she never seems satisfied with. Every attempt is marked by a blood-curdling scream and a redoing of her efforts all over again. The sisters initially hope the girl will quietly leave...but nothing is quiet with this mysterious person, who often goes on rampages, destroying many of the women's past acquisitions. Nonetheless, the siblings actually become more attached to and concerned for the strange stranger over time, as the film's presentation branches out into flashback's concerning the sister's rather dark past involving a mother who abandoned them and a young man they each fancied. The possessions of the house adopt more of their own come-to-life qualities as part of the overall explanation.

This is a film that's challenging to digest and open to many interpretations regarding femininity, love, longing, abandonment and other issues but is perhaps not meant so much to be rationalized as much as felt. It's a different kind of "chick flick" - one directed by a women from a very feminine perspective that I suspect may connect more readily with the better sex, leaving some guys to wonder WTF is going on. With its dream-like presentation (and the narrative loopiness accompanying that choice) Tominiga offers a film that feels both safe and risky. Toys, puppetry and animation continue to feed the whimsical aspects but are also powerful tools in conveying the very dark and ugly passages of the two women's past lives. While there are still many questions to ask about what has gone on, the last half hour of the film largely solves the puzzles of the first sixty minutes - perhaps needlessly so, as my major criticism of the film is that the last ten minutes are unnecessarily drawn out.

The art direction is particularity striking and the five leads (the sisters are also portrayed as young girls by other actors) deliver the kind of performances needed.  The pacing is uneven, dragging at times and not slowing down enough at others and the film does require a patience in viewing. Still, open-minded types will be rewarded by this sweeping cinematic experiment. Wool 100% is defiantly outside-the-box and not always comprehensible...but who cares? It's original in a highly impressive way. Definitely worth a look.
Posted by film guinea pig No comments:

A psychiatrist finds himself tied up to a chair in a garage with a number of rather sharp and painful looking tools awaiting his flesh. That's the way writer-director Malcolm Deegan begins Fractional, a micro-budget Irish indie from 2011 starring Desmond Daly as John, the captive shrink, and Peter O'Toole as David, a former patient who would like to take his old doc for an unwanted trip down memory lane.

Over the course of five days John is tortured, sometimes physically but mostly psychologically (for a flick that looks like it belongs to the sub-genre of torture-gore, the squeamish don't have to worry about having too much to handle here). David would like to get down to the aspects of John's past dealing with his departed wife, another woman and the less-than-professional behavior shown relating to all. Some twists in the plot show up along the way to inject new insights into what David is up to here and what John may have been responsible for before.

For a low budget/true indie effort, there are some good points to Fractional - the light and shadows of the garage setting works atmospherically and there are enough plot twists to snap some attention back to the proceedings when attention wanes, which happens a few times. And O'Toole delivers a pretty compelling performance as the tormented ex-patient turned tormentor.

But weaknesses do spring up - the 93 minute running time felt like it was padded by at least a quarter-hour. Daly tries his best but some of the dialogue from his mouth and attitude written on his face struck me as being unrealistically cocky for a guy finding himself in his position. Others may think that's just how his character is but I still found it bothersome. The ending, with the final revelation as to what the relationships of all the characters has really been about will strike some as implausible and others as predictable from as far back as several minutes before.

Fractional is probably best appreciated by fans of earnest low-budget productions that shun Hollywood gloss and don't mind some of the predictable warts that goes with a number of the micro-budget indie fare available. Click here for the rent/buy options.
Posted by film guinea pig No comments:

The film:
The Garden of Earthly Delights (2004)

The under-the-radar-factor:
Director Lech Majewski has his followers on the international art house circuit but, needless to say, finds few eyeballs in North America. With this film (based on his novel Metaphysics) being done in English, one must conclude he was seeking a larger audience than usual for his work. 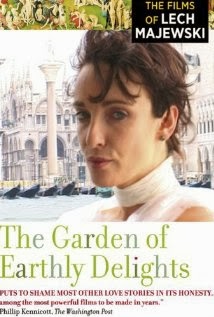 The plot (it may be a stretch to call it that) is not complicated - an art historian named Claudine (Claudine Spiteri) has coaxed her lover, the video obsessed Chris (Chris Nightingale) to come to Venice and satisfy their urges/requirements. Hers are with the work of Bosch; his with the construction of gondolas and related vessels. These each fit into the dissertations required for their individual academic fields...and, of course, they dig each other and want to engage in erotic play in one of the world's most breathtaking cities. Bonus. Chris records anything and everything going on at any given moment on his camcorder; no detail seems to be too uninteresting, intimate or tabooish for posterity. The problem is Claudine's throat cancer has reemerged and the news concerning it is all bad. An urgency emerges for the lovers to cover ground in what Claudine can leave behind in the world and what they can explore together in the Bosch belief that it's possible to experience heaven on earth.


Majeweski shot the movie in a not particularly high-end looking video format, with Chris' cruder footage telling much of the onscreen story for the viewer and some even grainier monitor replays filling in the gaps - sort of a progressively degrading "film-within a film-within another film" approach.

This is not to say that The Garden of Earthly Delights is a time waster. It just feels too much like art via your local dollar store - this "garden" seems like those cheap plastic flowers and plants you see in aisle 5 that may be kind of realistic looking and even semi-attractive - but they are, after all, imitations of the real deal. That's what this film comes across as. Go ahead and check it out...just don't say you were not warned.
Posted by film guinea pig No comments: