The under-the-radar factor:
A first-feature by John Chi, the film's exposure has basically come through its dvd release in early 2014.

I adored the American paranoia films of the 1970's. Give me a night with Gene Hackman trying so hard to figure out what they're really saying in the distance in The Conversation. Let's see if Max Von Sydow is going to blow away Robert Redford this time...or if Cliff Robertson will be the real sell-out in Three Days of the Condor. And I want to watch John Huston go through that flag one more time in Winter Kills.

By way of lighter-weight, lower budget contemporary offerings in this sub-genre comes Tentacle 8, a film that succeeds more through atmosphere than by making any sense...which I found contributed greatly to the atmosphere. Getting confused? Good...now you'll be in the right frame of mind in which to regard this movie. 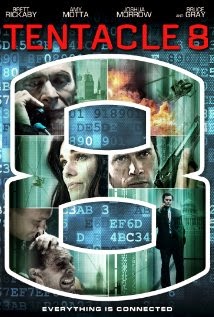 It's not enough we have the CIA, the FBI, and the NSA to worry about - turns out there is a covert group called Tentacle 8 that may be behind the mother of all computer viruses that has wiped out records across the intelligence community. The man who may represent the likely problems and possible solutions with said virus - and the ability or inability for anyone to retrieve the information that has gone AWOL - is Ray Berry (Brett Rickaby), code breaker par excellence. When we first meet him, Ray has slumbered into bed with the clock reading 4:45. After a quick fade-to-black, the digital clock face is shown flashing "12:00" - there has been a blackout in power, time... and information.

The gap in facts continues and the so-called plot jumps around considerably. Ray finds himself apprehended and placed in confinement, where he's beaten to a pulp by some soldiers, but befriended by another, who helps to spring him. He falls for a jet-setting CIA agent (Amy Motta) who may indeed love him but who is also working behind Ray's back with those trying to track down the Tentacle 8 elements. A chap disguised as a homeless person may be leading Ray towards danger...or answers. A guy named Mitchell may be pulling most of the strings behind the scenes...but may not be able to get out of the ambiguous mess he's helped to create. Mystery builds upon mystery; one part of the puzzle appears as others slip out. Ray's ethical stances are a problem for some and a tool for others. There are references that go back to that horrible day in Dallas and the other one in NYC decades later. The tale goes nowhere and everywhere.

There are shortcomings in Tentacle 8 that would annoy anyone. The film is just tooooooo long! Especially hard to sit through are the drawn-out, stilted lovey-dovey banter scenes between Rickaby and Motta, with clumsy dialogue contributing to their stiff deliveries and absence of chemistry. And throughout much of the film Rickaby's performance comes across as somewhat robotic and non-emotive; for a guy who has had the crap beaten out of him and who has a number of lives placed in his hands there seems to be a little too much "oh, well" in his attitude.

There are other elements that the same folks would have to concede are undeniably strong points of the film. The production values are crisp and never less than professional, helping the movie transcend its modest budget. The supporting players - that is, the performers representing the various members of the intelligence community trying to sort out the mess and the few who have a real idea of what has transpired - are well cast and help contribute to the dry but convincing sense of political intrigue. Max Blomgren's score is effective in the dramatic scenes (but unnecessarily sappy in the Rickaby/Motta hook-ups).

Then there are the issues that particular audience members will be bothered by, but for others...not so much. The lack of a coherent storyline and dearth of elements that allow a viewer to surmise "well, this led to that and, therefore, the other thing happened..." - if that's you cup of tea in enjoying a film, you'll definitely be left thirsty by this baby.

But as much as some may think writer Chi has copped out in the script and created scenarios without plausibility or, at least, due explanation...as much as many will scream "baloney", others (see my hand up in the air? It is!) will be wrapped up and intrigued by the ambiguities. Perhaps that goes a long ways to explaining our world outlooks but many of us who buy into the notions that this planet doesn't lend itself to making itself understood and that even those who seem to be in charge are often clueless about what's really going on will want to hop on for this ride.

It's largely a forest vs. the trees/feeling vs. thinking division. If you demand that everything you come across in Tentacle 8 deserves an explanation, then you'll hate this film. If you're willing to have the whole package deliver the paranoia perception through how you felt about what you experienced, then you may get as much a charge out of this as I did.
Posted by film guinea pig