Darwin's Nightmare Haunts Us All

The under-the-radar factor:
Nominated for Best Feature Documentary at the 2006 Academy Awards, it's safe to say this film has never garnered the same attention or audience as the winner of the category that year, March of the Penguins.

I have lived in the city of Toronto for all of the years of my life and at this juncture find myself residing in an area with the Humber River to the west and High Park to the south-east. I go for walks and see different birds hanging out in each area. The Red-winged Blackbird seems to rule the Humber valley, with a fair smattering of Goldfinches to boot. Marsh birds, Woodpeckers, Blue jays, Cardinals and far more exotic species can be found around High Park, especially as one makes their way to Grenadier Pond. There are all sorts of flying creatures that one will find in either location at various times of the year because...they belong there. 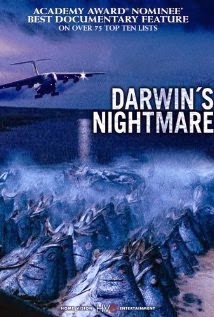 As the documentary Darwin's Nightmare points out, there were once a plethora of different fish that belonged to Africa's Lake Victoria. Then about fifty years ago someone (identity unknown...or, at least, unidentified) began depositing significant quantities of Nile Perch into the waters. Goodbye to the indigenous species, as the predator fish virtually wiped out whatever else was swimming in the lake. The Nile Perch fattened up to the extent of making it a most desirable delicacy to be packed and sent off for European consumption. The resulting industry that grew in Tanzania created winners and losers...although some on the down side of prosperity still felt they were better off than in their previous circumstances.

Something else has also been introduced in the Tanzanian landscape corresponding to the presence of the Nile Perch industry - planes. Aircraft fly into the region regularly and not often on a scheduled basis. The cargo crafts don't always arrive empty; some say guns are regularly brought in to supply those in battle in other parts of the continent. Before the planes fly back out with their loads of fish, the crews (mainly Russian and Ukrainian) take time to party with their "girlfriends" - the prostitutes they return to on a regular basis. These are the flashier women who are available for the visitors with the real big bucks but gals who have come in from the countryside with no other means of procuring income turn tricks for the local men looking for such distractions. Not surprisingly HIV infection and AIDS becomes an issue, helping to jack up the number of children living in the streets. The youngsters find their chief means of coping with the gloom around them comes by way of their makeshift means of sniffing chemicals found in the local refuse. And as far as diet for all are concerned, only the maggot-infested heads and other scraps of the Nile Perch are available, if that - the fillets that fly off in the aircraft are far too expensive to be considered by the indigenous population that finds themselves at the bottom of the economic totem pole of Tanzania.

Yes, there are all these specific references to what is happening in Tanzania but director Hubert Sauper uses the micro examination of the country in order to arrive at macro estimations of what the worst aspects of globalization/imperialism and the exploitation of those with lesser means amounts to.

Such an example is offered by the presence of Raphael, an ex-solider being paid a dollar a night to guard the fisheries institute. He "lucked" into the job when his predecessor was killed during an attempted robbery. Raphael knows an advanced education would help improve his standings but is aware that a more practical means for getting ahead would be the outbreak of war. If the government were to need him again, he could ditch his poisoned arrows and get equipped with real firearms and a better salary. It's kind of like an insane version of Thoreau's improved means to an unimproved end - better things can happen for some when bad things go down for others. But it's not the same means of amelioration he wishes for his son - Raphael would be pleased to see his offspring become a pilot, flying those planeloads of Nile Perch off to the well-heeled customers in Europe and returning with....actually, he's not sure what. Raphael just knows it would represent advancement, comfort...less of the nightmare.

Sauper hasn't constructed a let-me-connect-the-dots-for-you type of documentary, of the excellent Inside Job variety. There is also no Michael Moore-type intrusions, aside from some off-screen questions addressed to the participants. His film spools out more like an album - a collection of snapshots your regard from the beginning to the end and then arrive at your own conclusions as to what has really been broached. Perhaps an important missing element is the "before" picture - what life was really like for the people of Tanzania before the introduction of the Nile Perch. By way of omission of this examination, the inference seems to be that it was, of course, not as bad as now. Really? Perhaps it was more of a just-as-bad-in-a-different-way type of life, although it is safe to say the local eco-system was in better times. Perhaps widespread corruption has always been the issue, the force that kicks open the door for other evils? The film doesn't really try to reveal this significant type of back story.

Still, the bottom line becomes that what the locals go through now is plenty horrible and the exploitative nature of extreme globalized interests will not be the way out for these folks. It may not be the real cause of their troubles but it certainly ain't no cure. Even the Russian airplane crews seem to be a sad lot - while they enjoy the material benefits that come from their workload they seem embarrassed, saddened and perhaps even a little frightened by the ramifications of what they are involved in, even when they insist with a shrug that "it's business".

In spite of it's somewhat incomplete nature, Darwin's Nightmare is a film that refuses to leave the viewer unmoved. While this story may be set in what seems a world away, one is left with the creepy feeling that the Tanzanians are one of the folks who are first experiencing what may be to follow (or already has) for many of the rest of us in different ways. Look around...after you've first watched this film, of course.
Posted by film guinea pig