The Signal Comes Through Clear Enough

The film:
The Signal (2007) - not to be confused with a more recent release with the same title starring Laurence Fishburne.

The under-the-radar factor:
Launched at the 2007 Sundance fest, the low-budget (less than six figures) hybrid horror/comedy/sci-fi film has had light box office returns (just over six figures) but, in-spite of having polarized audiences and critics, has attained a cult status.

You know that Jerry Seinfeld joke that goes "Have you ever met anyone so stupid that they think you're stupid?"

In a way, The Signal asks the question "Have you ever encountered anyone so crazy...they think you're crazy??"

The film was directed by a group of three (David Bruckner, Dan Bush and Jacob Gentry) and consists of...hmm...three segments or "transmissions".  I guess this leads to the idea that each person directed one act, passing the baton off to the next. This would certainly help explain some of the jarring tone changes taking place from one volley of action to the next. 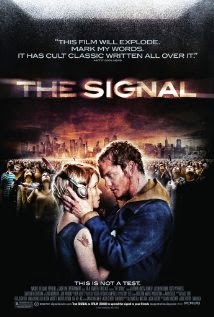 A typical torture-gore preamble about a group of captured women gives way to anything but the type of archetypal horror usually found at this budget level. The real opening to the story that follows, set in a nondescript city known as Terminus, introduces us to Mya (Anessa Ramsey), a married woman lounging in the home of her sidebar lover Ben (Justin Welborn). She's contemplating leaving her husband Lewis (AJ Bowen) but in trying to contact him her cell phone cacks - the first of many tech items that are not up to their usual behavior. Ben's attention is more diverted to his flat screen TV which has mysteriously turned itself on, emitting odd sounds and strange patterns.

When Mya does return home she sees that the people in her apartment block are acting in a loudly disoriented manner. She finds hubby and a few buddies pissed that their ball game isn't on the tube, with their TV making the same strange sounds and patterns seen elsewhere. The guys are goofing around with a baseball bat but something seems sinister underneath their jocularity, a sign they are experiencing "the crazies" the rest of the folks in the building seem to be going through. When the bat is used with someone's head substituting for a ball, Mya decides it's best to escape Lewis, even though the world outside has become violently unhinged, lined with dead bodies in the streets. This first segment is done in a relatively straightforward horror manner.

Jump to the second part...eh, act...eh, "transmission"...and we find ourselves in Shaun of the Dead territory. A smiling woman named Anna (Cheri Christian) is still expecting guests for her New Year's party...even though she has killed off her husband. Her rather nerdy landlord Clark (Scott Poythress) has a geeky explanation for why people are flipping over the edge from the TV signals but his palaver runs long and says little that can be comprehended. Meanwhile, Lewis and others invade Anna's apartment, attempting to kill each other when they're not trading jokes. Self-awareness of being disturbed and recognizing the same symptoms in others becomes more elusive as the mayhem increases.

The uncertainty over what is real and who can be trusted (and if one can trust their own selves) comes to a fever pitch in the third act//transmission, as Ben has teamed with Clark to try to save Mya from the clutches of the now total madman that is Lewis. This final segment truly takes the existential examination to the hilt, combining the horrific with attempts at humour, while also bringing in some cerebral sci-fi elements...as if things weren't already complicated enough.

The trailer doesn't convey how goofy the tone of the second act becomes.

The Signal is one of those films that some will dismiss, citing the "just-because-you're-indie-and-different-doesn't-excuse-the-lack-of-quality" argument. It is true that the acting is occasionally flat and unconvincing (especially at the beginning). You may end up feeling the exploration of the high-brow concepts being thrown at the audience are superficially examined. Then there's the grab-bag approach of three filmmakers playing pass-the-dutchie-and-fry-the-viewers-minds with the wild tonal changes taking place. And I haven't yet mentioned the considerable gore (which, of course, will be one viewer's music to another's noise). Understandable criticisms...

But then there are the strengths of The Signal. The generic qualities of the city of Terminus setting that actually gives the film an existentialist vibe, suggesting the horrors that lurk there could be around our corners or in the back of our minds. The acting that often does work well, especially (and surprisingly) in the middle Shaun-ish segment that could easily have had me checking out if it wasn't as successful as it was.

Arguably the strongest (and creepiest) element in the film is the uncomfortably blurred line between the routinely rational and the impulsively rabid. Some of the characters, aside from their split-second descent into violence moments, don't really carry themselves much differently in normal conversation as some of the people you would meet on a daily basis in your life - they just carry through with whacking you in the end. In a world increasingly fueled by low tolerance for what the other person thinks and believes (hmm...can media in general and television in particular have something to do with that?), The Signal might have gone deeper but still raises enough on the matter to make its point.

The less subtle, wilder ingredients - low-budget gore horror on one side, outrageous attempts at humour on the other - may strike some as irritating but actually helps to contribute to the sense of disorientation the filmmakers are seeking. (Again, one person's music...) And providing the glue to this mercurial trip is the simple love story of two people wanting to be with each other. For yours truly, this all worked.

And, oh yes,,...it is daring and different the way true indie cinema should be.

In spite of some shortcomings (which, as I'm suggesting, may be more in the eye of the beholder) , The Signal was a film that I found myself intrigued with throughout, always wondering what was going to happen next. A truly wild ride, it's also an acquired taste but one I suggest you sample.

Many thanks to Kirsty (@twistedsista74) for bringing this one to attention.