The under-the-radar-factor:
The film has played at a number of smaller and specialized film festivals where it has won some awards and has aired on Swiss television but its main means of exhibiton appears to have been through streaming on Google Play and DVD sales through the production's website.

Two Swiss filmmakers try to come up with a script for their made-in-Hollywood micro-budget movie when a dead dude bearing a strong resemblance to a certain A-list celeb complicates an already chaotic situation in Who Killed Johnny, a first feature directed by European actress Yangzom Brauen. 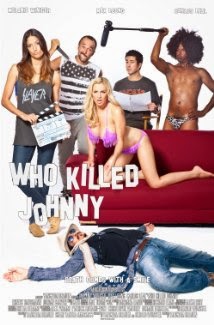 As indicated, the story takes place in a film-within-a-film setting. A writing/directing team (Melanie Winiger and Max Loong) sit around their apartment doing alcohol, drugs and very strange conversation with the very strange people dropping by as they bounce ideas around for the script they are trying to write for a low budget movie. Imagined scenes go through numerous variations involving the male lead (Carlos Leal), while the creative team try to also put some focus on their real lives and desires. Providing unneeded distractions are the outré crew/cast members in waiting, Jambo (Ernest Hausmann) and his outrageously curvy gal pal Gudrun (Jordan Carver), who end up hogging the swimming pool. The production and the lives of all involved turn on their heads when a dead body shows up on the street outside. A Johnny Depp lookalike for hire (Ronnie Rodriguez) has apparently been run down by a car and his corpse creates problems and opportunities for the desperate filmmakers. Genuine principal photography of the film finally gets underway, where tensions rise and the lead actor gets a little too real with his intensity in the pivotal kitchen scene.


The problem with this movie is the same problem faced by the two lead characters in the film - what to do about the script? Who Killed Johnny spouts out a number of ideas and premises but never really develops any, jumping from one implausible circumstance (even for a comedy) to another. People with filmmaking experience that can relate to the agonies involved in trying to put out cinematic endeavors will be more amused by the frustrations of the two main characters than general audiences will. At the same time, the lackadaisical manner in which the protagonists try to throw together a movie project may be seen as insulting to dedicated film artists.

The movie does realize a needed focus in its last twenty minutes, as the cast and crew characters finally get around to trying to accomplish something tangible and the interplay between them works in an arresting manner. Unfortunately, it doesn't make up for the rag-tag nature of the preceding hour that gets the audience there.

This is all very unfortunate, as the cast is actually very likable and seems more than talented enough to take on a better developed project. And for a film that is obviously being done on the cheap (sticking to the one central locale of action throughout), the production values are first rate, with particular kudos going to the crisp photography and sharp editing on display.

Who Killed Johnny, like the film within the film, is a glimpse of what might have been if serious scripting details had been improved. Director Brauen and company serve notice they are capable of better things and should be encouraged to go forward with such.
Posted by film guinea pig