Mourning Has Broken...With No Time For Tears

The under-the-radar factor:
This film, written and directed by the brother team of Brett and Jason Butler, is one of five financed with a $1,000 grant from an initiative put out by independent filmmaker Ingrid Veninger. It has made festival appearances (winning awards), had a week long run at a Toronto theatre and is slated for a VOD release in 2015.

The song "Morning Has Broken" holds a special place in the hearts of my wife and I. This Christian hymn (better known to many from the version put out by Cat "You Can Call Me Yusuf Now" Stevens) was played at the beginning of our wedding ceremony. So, I was certainly able to take a trip down memory lane with a recent screening of the micro-budget dark comedy Mourning Has Broken (clever play on words), where the song is given no less than six different versions/interpretations on the soundtrack.

Nice...but not the only nice thing about this spunky effort. 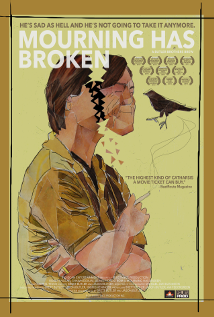 A character known simply as "Husband" awakens one morning to feed his cat a gourmet meal before heading back to bed and to his wife, who, as it turns out...is dead. The plethora of medication on the side table clearly indicates the woman was not well and her passing far from a surprise. Still, the loss is a shock and her husband doesn't seem able to cope with her departure. Putting his best face on and pretending that it can be "just another day", the widower finds the "to-do" list his spouse had made up and sets about to accomplish each of the tasks that would have been expected of him.

The problem is, "Husband" is about to encounter a multitude of assholes in the world outside on what has already started out as the saddest day of his life. His bully neighbour insists on coaching him on how to wash his car. The clerk at a clothing outlet won't allow him to return an unsuitable garment bought for his wife. Fellow motorists are either driving too slowly in front of him, giving the wrong turn signals or are berating him for not moving out of parking spots quickly enough. Once his vehicle shows a flicker of an issue, the nearest auto mechanic is more than willing to upsell the maintenance requirements to come. The audience at a movie house is too busy talking and texting to allow him to enjoy the screening. All along, a certain kind of cake he needs to acquire becomes as easy to locate as the Loch Ness Monster.

At first, our main character tries to keep his cool, taking the high road and staying polite. But eventually, the world around him becomes too much to bear for a man repressing emotions that don't need to be stirred any further. Vocal assertiveness gives way to physical reactions and before "Husband" knows it, he is planning on the kind of retaliations where baseball bats come in handy. His final actions allow him to return to the side of his deceased and conclude his long day in the way he feels he must.

With indie productions in general, and low/no budget efforts like this one in particular, scripts can be the strongest element if enough time and thought have been utilized. Production values are a less certain variable, given the obvious restrictions on what can be accessed and the conditions the filming is done under, far away from high-tech sound stages. The area that becomes the most problematic is the acting talent, since Benedict Cumberbatch probably can't be enticed to show up to your shoot, no matter how fresh you promise the coffee and bagels will be.

Flip those concerns on their heads and you have the strengths of Mourning Has Broken showing up in reverse order. The lead character is played by Robert Nolan and this guy totally brings it in a way most filmmakers dealing with minimal financial resources can only dream of. Nolan is practically in every single frame and delivers the right blend of inspired lunacy and moving dramatics throughout. His Howard Beale-ish movie house rant is a classic at one end; a flip-side three minute single take in a record store shows a suddenly taciturn man expressing everything in his emotionally wracked face. Nolan is so good that one may be concerned that he would show up the deficiencies in a supporting cast made up of amateurish personnel, but the Butler bros struck gold in that vein as well. The actors the husband character is required to play off of are pretty much all up to the challenge, with a special nod to Graham Kent as that all-too-familiar kind of shady auto mechanic you don't want nursing your wheels.

While there are are occasional signs this film was made for cinematic spare change, the overall look is sharp, with the Michael Jari Davidson's Cannon 5D MKII camera work complemented well by crisp editing. Sound montage and the aforementioned musical score are also of top caliber.

The least hearty aspect of the film is the script, which is pretty much a one-trick pony of sorts. You come to understand that the husband surveys the to-do list, sets off to accomplish a task and, along the way, has some sort of confrontation, to be echoed over and over again. The predictable rinse-repeat cycle is less successful in some scenes than in others. While the movie clocks in at 77 minutes, some of these bits feel too drawn out and often take their time arriving at any payoff. Fortunately, Nolan makes most of these periods worth the wait in the end.

Considering this effort was made for less than five figures, the results the Butler brothers have produced are quite impressive. Many times you've seen a film and said to yourself "I could do better than that!" This film will have you saying "with what they had to work with, how could I have topped this?"

But what does that have to do with it being a film to recommend, especially if folks out there are debating forking out some coin to catch it?

When Mourning Has Broken makes its VOD debut, it will be up against big studio cinema candy, flicks that cost a lot of money and, in many cases, ripped off the movie-going public for at least as much. There are great films to be had in the streaming/downloading world but there are also tons of insincere, dubious ones. A sterling example of how much can be done by extremely modest means, Mourning Has Broken puts many big budget motion pictures to shame.
Posted by film guinea pig