After creating a movie about a particularly bad filmmaker making particularly bad films in the 2010 production Le Fear, writer-director (and sometimes actor) Jason Croot brings back the character of Carlos Revalos for Le Fear II: Le Sequel, a low budget comedy/mocumentary/movie-within-a-movie effort to be released in 2015.

Carlos (Kyri Saphiris) falls for a pitch from his executive producer and ends up putting a substantial sum of his own money into the horror film they will be making. Revalos is a kind of reverse Ed Wood - he too makes crap but at least he knows when things are going wrong and will come out like shit. The flick he's working on turns out to be quite the international effort; the producer on set (actually, there isn't a set as promised...only a van) turns out to be a Nollywood import with a bargain-basement attitude. Mixed in with Brit, French and, eventually, Japanese talent, the production hardly has world harmony going for it. The special effects person provides offerings that are anything but special; the make-up person goes into heat and wants to have sex with just about anyone she comes in contact with; the French actress gets fed up with the chaos and is replaced by an oriental substitute who really can't speak English, and so on... 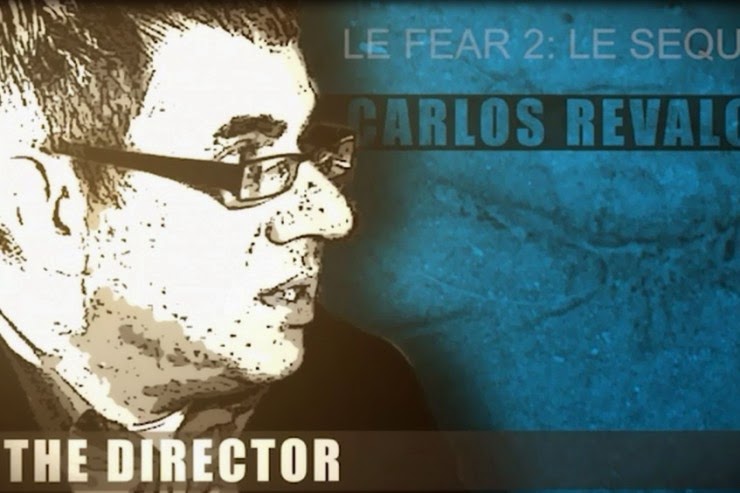 At one point a frustrated Carlos thinks out loud that he might just take the material he has and at least get a short out of it. Some watching Le Fear II: Le Sequel may think that would have been a good option for Croot's feature. The film has a talented cast trying to handle what appears to be an entirely ad-libbed effort but the same kind of scenes are played out endlessly. "ACTION!"... (something goes wrong) ..."CUT!" ... (curse) ... (argue) ... (despair) ... (rinse) ... (repeat) ... get the picture? The fact the characters come across as too predictable and stereotypical also doesn't help.

Le Fear II: Le Sequel will hold some entertainment value for those of us who have been on film productions of various scales who know only too well that what can go wrong will. And there is a certain build of interest that comes from wondering how the Carlos character will try to overcome all the obstacles. But for many viewers, the entertainment value of this effort will not be regarded as impressive. And certain folks could be uncomfortable with the way the Nollywood contingent are portrayed.

Still, if nothing else, Croot is determined. He already has plans for additional Le Fear/Revalos sequel efforts. Perhaps that perseverance will pay off if it meets up with a little more originality and inspiration.
Posted by film guinea pig