The under-the-radar factor:
The films of director Bobcat Goldthwait, while often critically acclaimed (or at least highly recognized for their audacity), have never done huge box office or found a mainstream audience. This film had a limited run on the theatrical circuit before its early fall DVD release.

Back on October 20, 1967, Roger Patterson and Bob Gimlin were said to have shot some footage around Bluff Creek, California showing what appeared to be the infamous "Bigfoot" (aka "Yeti"). Some say it was a dude in a monkey suit but that hasn't stopped many from being obsessed by the topic. That fixated attitude leads a couple into trouble in Goldthwait's break from black comedies and into the faux found footage horror genre. 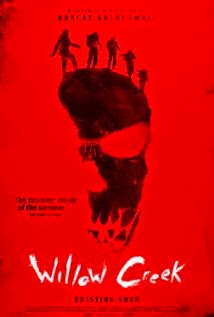 Budding documentarian Jim (Bryce Johnson) has dragged his girlfriend Kelly (Goldthwait stalwart Alexie Gilmore) along for a trip to Willow Creek and the site where Patterson and Gimlin had shot their famous/infamous footage. He is set on taking a camping trip to the exact area where Bigfoot was alleged to have been spotted; she supports her man but sports a high degree of cynicism in the subject matter at hand. Local townsfolk and people who are said to be in the know about the subject and its reverberations are interviewed - some take the legend more seriously than others but the whole area is basically a dollar store version of a Bigfoot theme park. In between chats with the natives the couple try to have some fun and take in the sights. (They seem to care for each other but it's also obvious their relationship may not be on as strong a ground as Jim would like.) Just as they prepare to embark on the real investigation in the woods, they receive warnings - one low-keyed and the other definitely not - to take the Yeti legend seriously and go back to where they came. Predictably, Jim is undaunted and convinces his gal pal to proceed.

Describing the goings-on beyond this point would be traversing into far too much potential spoiler territory...see you after the trailer.

It seems with these faux found footage efforts that two crucial factors weigh heavily in the chance for a production to sink or swim in connecting with its audience. The first concern involves the matter of suspension of disbelief being severely challenged as to whether one will buy into a camera being turned on or left running at certain times. Even the most successful movies in the genre have at least one moment where the viewer reaction would be close to "yeah...right, lol" over the red light beaming away. The second component crucially needed for the semblance of cinema vérité illusion is that the performers don't appear to be actors acting but rather come across as unpolished everyday blokes going through natural motions.

Willow Creek has issues on both accounts. Some of the personal matters that the couple feel need discussing while driving seem like strange material to be recorded. They already know the equipment works, so why all the blabbering for the camera? A no-cost form of therapy? There are also the proverbial "I better run for my life...but damn if I'm not going to shoot this for the world to see" moments that will again send some eyeballs rolling.

As well, too many of the cast members fail to leave behind their thespian signatures for the world to see. A few actual (and obvious) non-actors are along for the ride but some of the professionals can't convey the same naturalness. The way people use language in real life - both the verbal and body kind - isn't the same as the way actors deliver the goods in mainstream fictional cinema. Actual folks run over each other's dialogue and interrupt each other; they also don't happen to pivot and pose to be perfectly framed by a camera that's supposedly recording them on the fly. Too many of these kinds of moments emerge in this film to go unnoticed.

Some films have you continually checking your timepiece to see if the movie will ever end; Willow Creek has you paying attention to the moments left to wonder if there is ever going to be a real payoff arriving. The elongated "tent scene" provides a few shutters, but while the concept of "what you hear can be more important than what you see" is an appealing tactic in theory, the execution here just doesn't produce enough oomph.

Clearly being marketed as a found footage horror movie, Willow Creek shortchanges on the scare aspect. Some may appreciate the amount of time dedicated to exploring the couple's relationship but these eyeballs found that to be a tedious experience.

They say a change is as good as a rest. I look forward to Goldthwait returning to his black comedic strengths after what seems to have been an unneeded cinematic detour.
Posted by film guinea pig