54 Days With A Whole Lot Going Down

The under-the-radar factor:
Low-budget Australian production has run at a few festivals but its major source of exhibition has been through the download/VOD route via the film's website.

...you go into a restaurant and you order one of the specials. It's been given a name that makes it sound like something you might be familiar with but when the dish arrives at your table, it turns out to be a little...different. You bite in - some ingredients taste predictable and cooked the way you had expected them to. Other aspects of the food may be a little on the raw side but still kind of enjoyable. You can't help but sense that there could be something missing that should have been added to the mix. Still, once you finish the concoction, you lean back and say to yourself - "Interesting. Not perfect...but interesting. It was worthwhile. Definitely worthwhile. Glad I tried it."

That's sort of what it's like watching director Tim Lea's indie effort 54 Days. 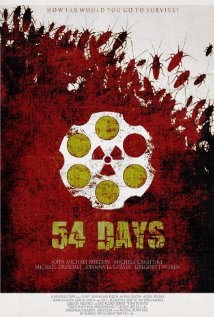 It's party time on a Sydney rooftop, even though the world seems to be going through some heightened tensions - based on what you hear on the soundtrack, things are about to blow as far as Chinese and Russian factions are concerned (hmm...sanctions against Moscow are mentioned...oops). Still, the wine is flowing here as Michelle (Michela Carattini) puts up with the presence of her less-than-warm husband Anthony (John Michael Burdon) but is really waiting for the arrival of her hotty lover Nick (Michael Drysdale), who has an intriguing additional reason to attend the party. Michelle's activist friend Elizabeth (Dianna La Grassa) makes her presence felt, as does Dirk (Gregory J. Wilken), gushing over a particullarly good glass of shiraz. But before you can say "hey...why are those rooftops burning in the distance?", the flash from an exploding nuclear bomb has everyone heading for the hills...well, actually, for the stairs. After stepping out to accomplish a sinister deed, Nick rejoins the gang (with fresh blood on his shirt...the plot thickens) and eventually steers the four other aforementioned individuals into a 1960's bomb shelter he knows only too well. Locked out of the safety of these quarters are the three men who have been in pursuit of Nick for his actions upstairs - they are left to die on the other side of the doorway.

From what can be gathered from an emergency radio broadcast and Nick's understanding of what the shelter can accommodate, the five survivors know this much; not only have Sydney and other major cities around the world been nuked but a biological weapon known as Agent Four has been unleashed, making the outside environment even less inhabitable. The sealed-tight shelter was designed for only two adults and two children to inhabit for a couple of weeks. And, in order to stretch out the scant food, water and energy resources available , lots may have to be drawn to see which one of the five people may have to be sacrificed in order for the others to try to survive. (But the cockroach who was the shelter's original inhabitant is safe - exalted and worshiped, in fact.)

Sometimes the weather changes unexpectedly and so does 54 Days at times too. There is the conventional linear narrative aspect that one would pretty much expect to see. You know that life in a fallout shelter with provisions running out and certain death beyond its walls is going to be grim and gritty and that's certainly the case here. Nerves are predictably frayed.

At the same time there are some interesting sidebars - the cockroach follies, the murky murder sub-plot surrounding Nick and the creep factor that establishes to his character, the infidelity storyline - all of these details help make the film watchable throughout, even when the pacing challenges one's attention span.

For a lower budget production, 54 Days manages to side-step most of the common pitfalls. The acting range of the five main thespians is, for the most part, solid. Productions values are good, with considerable skill shown in the videotography and editing. Considering that almost the entire film is shot in one location, the end result is highly cinematic and avoids smacking of canned theater.

There are some script holes which produce some less shining moments (where did that gun come from?) and the movie may not win over a lot of fans in some parts of the world with its portrayal of Chinese interests in the scenario. Also, the short film Lea had previously done that inspired the feature (feel free to watch it - it's significantly different enough from the larger project so that it doesn't act as a spoiler) contained a game of Russian roulette that had considerable dramatic impact. Something similar would have been a welcome addition here.

But, by and large, Lea's admirable first feature is atmospherically rich and intriguing throughout. VOD dollars and cents would be better spent here, compared to many higher budget offerings. Worth checking out.
Posted by film guinea pig