Just Another Gore-fest?...VANish The Thought!

The under-the-radar factor:
Actor Bryan Bockrader tries his hand at directing with this first feature. As with so many new indie titles, there are VOD, DVD, Bluray, and iTunes options available to check this one out. It seems the best way of keeping up with news on the flic is via its Twitter feed.

With healthy dashes of Tarantino/Rodriquez inspiration fueling it,  VANish is a micro-budget production that makes the most out of one environment - the inside of an automotive vehicle that serves as the setting for what at first seems to be your run-of-the-mill kidnapping for dollars scenario. But, as you may have already guessed, things are far from what they initially appear... 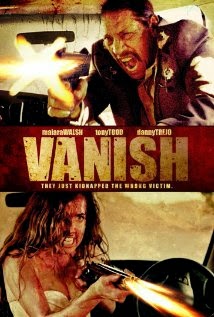 The movies' prologue reveals a love-bird couple being abducted (the significance of which is explained as the central story goes on) from their vehicle right in the middle of their midnight amour session. Their van resurfaces a few months later with a war vet named Jack (Austin Abke) and his obnoxious sibling Max (writer/director Bockbrader) taking it on the road. Small talk ("...onions have penicillin", "...you can get that from a hand job?" ya-da, ya-da) gives way to the bros executing their violent plan - the abduction of a potentially valuable young lady named Emma (Maiara Walsh). The bad boys are eventually joined by their unstable and unreliable accomplice Shane (Adam Guthrie), a dude who makes the other two crackpots look like rocket scientists. The one thing that then stays true and remains clear for the duration of the film is the intention of all to have the kidnapped victims' dangerous daddy (Danny Trejo) meet up with this foursome in the desert, allegedly to collect some ransom money from this cartel Carlos guy. This is in spite of Emma not being your typical damsel in distress and not having been on the best of terms with papa for a long time. By the middle of the story it becomes clear not everyone is on board for the reasons originally expressed, setting up a further layer of tension between those taking the thrill ride in what has become an increasingly beaten-up van.

Somewhat reminiscent of exploitation flics from the Corman era, with a sprinkling of black comedy satire, VANish has a clever (if not entirely original) opening and an ending that has more than enough going for it on the violence meter, if that's what you're looking for. Considering the whole movie was filmed in less than two weeks with a paucity of locations, the production values are truly commendable. The camera work is ace, the lighting in the few night time scenes does not come across as amateurish (always a concern for low/no budget works), and the sound track and editing are very sharp. The silly moments are usually more fun than irritating and the mix between times that make you say "ha-ha" and "Holy S**t!" are fairly well balanced. The gore effects don't look amateurish and the final confrontations, while not delivering anything new, will more than satisfy most action seekers.

The cast does a good job of keeping the viewer wanting to follow the ride, which is no easy feat considering how unlikable the main characters really are. Walsh is quite amazing - she gives (first with words, then with physical consequences) as good as she gets and proves she's a lot more than blood soaked eye-candy for a movie poster - a comanding performance. Abke handles a complicated role in admirable fashion and Bockbrader succeeds in making a disgusting character, for the most part, watchable. B-movie vet Tony Todd is a scream in a terrific cameo as a highway patrolman who is both menacingly cool and hysterically funny. And then there's Trejo (you know ...from the Snickers commercial. Hmm ...I think he's done something else ...maybe). He's ...well, he's Trejo! Guthrie struggles a bit playing the least interesting character.

As well executed (layers of meaning to that) as most of the film is, there's a serious bog down in the middle. Once the characters start articulating the real reasons they have for doing what they're doing, eye-rolling dialogue comes out with firehose force - what sounded nonsensical but entertaining early on gives way to the irritating and stupid here. And, in general, there's far too much yakety-yak going on in the centre scenes, causing this otherwise fast moving vehicle to hit some unfortunate and unnecessary speed-bumps in its pacing. Also, many will be disappointed that Trejo is there for what basically amounts to a cup of coffee in screen time.

Tough-as-nails sexy chicks. Crazy guys who might kill each other before their enemies. Drug cartel desperadoes ready to blow your brains out in the desert. For the crowd looking for this type of entertainment, VANish does a good job of delivering the goods. It also excites for the potential shown by some of its participants - Walsh looks like she's due for much meatier, breakout roles and Bockbrader looks promising in writing and directing his debut feature. Far more watchable than similar attempts of this ilk, VANish is one to recommend.
Posted by film guinea pig