The Fine Art Of Falling Apart - Down The Neorealism Memory Lane

The under-the-radar factor:
Done on a budget of $2,500, the debut feature of Ace A. McCallum features a (mostly) non-professional cast of performers. The flic is currently available through the online screening company Film Rabbits. Additional information can be found through the production's website.

While the mid-1960's to early 70's saw French Canadian cinema win accolades with the (comparatively) prodigious outputs of the likes of Gilles Carle, Denys Arcand, Claude Jutra and others in the Quebec scene, their English counterparts struggled to receive critical and popular domestic attention. Still, there were notable releases in a vein that came across in what could be described as "English Canadian Neorealism". Donald Owen's Nobody Waved Goodbye, Don Shebib's Goin' Down The Road, and (if one regards it as the neo-fiction side of the same coin with neo-documentary on the other), Allan King's A Married Couple, were critical standouts, if indeed still hard pressed to find large audiences. (Side note: watch Owen's classic for free on the NFB website). The look and feel of these films could, of course, be largely attributed to their paltry financial resources but one could also see the intention to chronicle lives in as straightforward and real a manner as possible, Hollywood plot contrivances be damned. 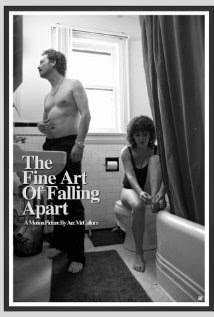 With its black and white visuals, scant soundtrack (although music is used appropriately, à la Dogme 95) and naturalistic acting, The Fine Art of Falling Apart looks and feels like the kind of throwback a previous generation of English Canadian filmmakers would be proud to accept as a cinematic kindred spirit. That's to say that it is a film with integrity, while hardly being a groundbreaker.

There isn't much of a plot to speak of here - Daryl and Faye (Rich Piatkowski and Nelia Amaro) can't agree on burgers vs. tofu but they both seem committed to starting a family ...although by varying degrees. She frets that there may be medical circumstances to explain why she hasn't been able to get pregnant but seems unaware there are other reasons to worry about their family life. Daryl's growing attention towards an attractive fellow employee at a watch and jewelry store signals where his priorities are. Once the couple receive the diagnosis revealing where they stand on the possibility of parenthood, Faye goes into a tailspin. What ends up filing the void for the shattered pair includes swinger parties, cocaine, infidelity, separation, more cocaine, more infidelity, ...and the list goes on.

Some may find the ground covered here to be too overt but there's no doubt that the film takes off as the lifestyles of the two main protagonists become more extreme; this is done without succumbing to sensationialism. Others may appreciate that the delusions we place on ourselves and others need to be recognized more often and this movie documents that well.

A realistic slice of life project that doesn't subject one to the same sort of day in, day out things most of us suffer or celebrate through,The Fine Art of Falling Apart is a more than competent film that gives it a solid try in depicting a couple that's doing all the wrong things and keeping that interesting enough for 71 minutes. The production values are very solid (the framing of some shots tells you a lot more of the character's inner states then they ever could articulate themselves) and the performances are done in an appropriately unshowy style.

That bit about Hollywood plot contrivances be damned certainly shows in McCallum's debut. A production that will hold a good level of interest with fans of indie cinema, perhaps it's a film that's hard for some mainstream tastes to get excited about but should be easy to admire by most. In other words, it's worth taking a (viewing) chance on.
Posted by film guinea pig