Reviews: Beyond The Grave and Bodom

I finally get back to some reviews, more of the mini variety as I try to get healthier. Here goes...

Something has led to the gates of hell opening up (in, what they tell us at the beginning of the film, after a Nietzsche intro, "another time, another place") with a corresponding zombie apocalypse having transpired in Davi de Oliveira Pinheiro's feature debut. Thing is, the walking dead are mostly onlookers as a dude known as "Officer" goes searching for a demonic serial killer using the handle of The Dark Rider (appearing in different incarnations, including a female one). The former cop comes across others who come along for a (short) ride in his beaten up but dependable car as the story takes more loops than a roller coaster.

Solid production values and a seemingly talented cast largely go to waste in what is apparently meant as some sort of existentialist head-trip. Beyond The Grave is too pretentious for even more open-minded viewers, too deficient in character development and back story for mainstream folks, and not quite blood splattering enough for the gore crowd; in short, a movie without an audience.

Just  when you thought you've had your fill of found footage flics, along comes a decent and refreshing offering, supposedly Hungary's first entry in the genre. At a tight 65 minutes, directors Gergo Elekes and Jozef Gallai make sure their story does not outstay its welcome, while providing enough genuinely creepy moments to make for worthwhile viewing.

Not be confused with an upcoming slasher film of the same title scheduled for release in 2016, this production follows two media students creating a documentary on the infamous Lake Borden murders of three teenagers (one of the campers survived) that took place some five decades before. The scenario, however, covers less of the historical incident and more of the present bickering between two people in a cold forest who seem to have a strange layer of tension that's obvious but not immediately explained.

Bodom is effectively presented in a fake documentary envelope with the so-called found footage sandwiched inside. As with all such films, there is a bit of a slow build to anything that really grabs you and a few of those "...but why would the camera be running then, showing that?" moments exist. On the plus side, most of the actors do a good job of looking natural and not obviously "acting", with the fake interviews of those who knew the two students enhancing the intrigue. Atmospherics are, of course, crucial, and this is where Bodom pulls ahead of many of its contemporaries.

The movie answers few questions and raises many others; this is certain to rankle those who like to be spoon fed, while those who prefer the intrigue of many possibilities will enjoy to take part in the guessing game. Count this reviewer in the latter group.

Clearly, The Blair Witch Project is the bar by which similar entries are judged. Bodom hardly comes across as BWP-lite and will appeal to those fans of the format, while introducing enough originality and style to cement a respected place in films of this type. Worth catching. 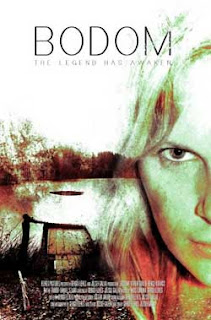