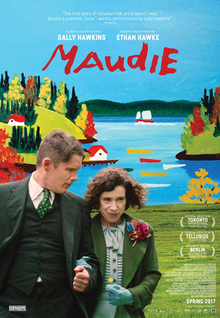 So the story goes like this ... Racked with rheumatoid arthritis that affects her gait, Nova Scotia born and raised Maud (Sally Hawkins) discovers her asshole brother has sold the property of their deceased mom - the fink needs some of the cash to pay off their control freak of an aunt to look after the sibling he prefers to ignore. Devastated that she's not heading back to the one joint she considered a home, Maud (kinda) rebels; first by dancing solo at a local jazz club in the wee hours, and then by announcing that she is taking a powder on Aunt Ida's hospitality. Fate strikes as she finds herself in a local store just as grumpy illiterate fishmonger Everett Lewis (Ethan Hawke) arrives to whine his way into convincing the proprietor to write up an ad for a housekeeper. Maud answers the call, arriving at Lewis' no-frills shack of a domicile to a cold reception and a mountain of nit-picking doubts from her potential employer ... but - wink - you know he's going to eventually cave. Unfortunately, not all of Everett's criticisms of Maud's lack of attention to chores are expressed solely through words (the one such outburst shown in this telling of their story is difficult enough to sit through); nonetheless, an unconventional romance develops, leading to marriage. Everett has no use for the cheerful paintings of plants and animals Maud creates to decorate the cottage walls but a New York socialite staying in town commissions some work. This leads to local fame (and a bit of coin), which leads to the insecure husband trying to keep his fragile ego in check for as long as possible - one guess as to how that goes. But even with all of their falling outs, Everett helps Maud learn the truth regarding an explosive situation from her past.

I see the name SALLY HAWKINS on the credits and expect a performance that shines, but this time she's outdone herself. This may be the best work of her career. You may have heard some Oscar buzz surrounding this gig and it is well deserved. Hawkins seems a natural to take on her role; what is particularly interesting (and highly impressive) is how Hawke manages to keep pace. In my books the guy is a little too Handsome-Hollywood-Leading-Man(ish) to have been an obvious casting choice for the role of husband Lewis - that's driven home by a brief clip at the end showing the real Maud and Everett from the CBC documentary alluded to in this movie. Nonetheless, eye-candy Ethan delivers the goods when it comes to conveying Everett's uglier internal moments. Put a star next to this performance on Hawke's curriculum vitae.

The cinematography displays several Left Coast scenery-so-crisp-and-beautiful-you-can-practically-smell-it moments (aside: Newfoundland actually stood in for Nova Scotia - follow them tax credits, ya all!). The pacing of the film is, for the most part, appropriate, although the threats of separation between the not always happy couple provides for some tedious junctures. While the storytelling is conventional in approach, director Aisling Walsh seems to sense that Sherry White's script would be well-served by hanging the narrative on the strong shoulders of the two leads and leaving it at that. Smart choice.

This film can take bows for:

- a moving tale told without sappiness.