So the story goes like this ... truth is stranger than fiction - can fiction pass itself off as truth as easily as suggested by Andrea Marini's The Art of the Prank? Joey Skaggs has proven that to be the case, time after time. 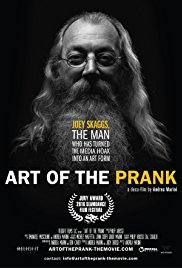 A bordello for dogs. A priest with his own mobile confession booth. A coma-inducing drug in combination with hypnosis that allows people to experience fantasy vacations. Extracts from cockroaches to enhance human health. A celebrity sperm auction (for those who wouldn't want to pass up the opportunity of carrying Bob Dylan's love-child).

Preposterous? Absurd? No one would fall for such bunk?

The media has - both on a small-scale local basis, as well as mega-players like the New York Times and CNN - over and over again at the hands of the frustrated artist who decided he needed to see more immediate responses to his work while showing how gullible said media can be.

Art of the Prank takes a shaky, rather unfocused look at the life of Skaggs. The viewer is circuitously plopped into areas of his life and work, rather than smoothly arriving at them - a chronological as-the-crow flies approach would have helped. And there are numerous gaps that confine the documentary as straight reportage with little in the way of human interest carry. What was really up with his earlier Hawaii period? Aside from caring for his mom after the death of his father, what were the close personal relationships in his life? Other missing points of interest: where does he get the coin to finance his projects, as low budget as they are? Why is there as much screen time consumed with following the plotting of a faux documentary on GMO issues with no significant glimpse at the film itself? Too much "why, why, why?" going on here.

The subject himself is a pretty fascinating guy, although one could dismiss Skaggs and his numerous co-conspirators as being more infatuated with infantile actions where the payoff is giggling over deceiving the media, rather than truly enlightening the public. As Phil Donahue is briefly shown pondering, doesn't the media attention Skaggs produce take away from the coverage of serious issues? It's also ironic to see - after getting national and even global coverage through his other actions - Skaggs thoroughly sweating out the production of the faux documentary and getting the final short film into less than A-list film festivals with only (seemingly) a few dozen in attendance at any screening.

Perhaps two quotes from profound intellects could best sum up how one may end up regarding what Skaggs has been up to and the true impact (or lack of) he has had. The first comes from Henry David Thoreau who said "There are a thousand hacking at the branches of evil to one who is striking at the root." Hmm. So, in terms of addressing the societal poison that arises from media incompetence in delivering accuracy, are Skaggs and company more of the latter than the former? Perhaps I'm influenced by that other quote ... from a plumber I had over to fix a leak. "Yeah, make no doubt about it ... if you see a little tiny drip on this side of the ceiling it means you have a really big problem on the other side." I tend to agree. Joey Skaggs spots drips showing that there are some serious problems with a traditional media crowd that points to alleged fact-checking prowess as a reason they provide superior deliverance of "the truth" compared to the alternatives that have arisen in the digital age. And he's been proving that for decades. For that reason alone, Art of the Prank is worth a look.
Posted by film guinea pig No comments: