So the story goes like this ...Bill Oberst Jr. passed along a correspondence asking me if I would have a look at his new project, director Adrian Corona's effort called DIS. In the email he used the term "arthouse horror" as a descriptor of the work. The first time I found Bill using that tag was when he asked me to have a gander at Coyote, one of the most interesting films I have seen in the last few years. His latest foray into this sub-genre delivers equally intriguing, if somewhat cryptic results. 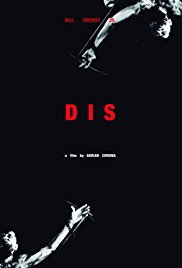 Providing an explanation of the narrative is a bit of a time-waster, as what goes on story-wise is not particularly fleshed out (seemingly on purpose). This is either a good or bad thing, depending where you as the viewer are coming from. For what it's worth, the official synopsis that was passed along to yours truly goes like this:

"An ex-soldier with a criminal past takes refuge in the woods. A demonic figure seeks the seed of killers and the blood of the damned to feed his mandrake garden. DIS is an infernal descent into the root of the mandrake legend and a man who wanders too close to that legend and the unnamable terror behind it.  What you sow you will reap…"


Now have a gander at what to expect visually, and, yes - the end product is as graphic as what is being suggested here...


DIS is indeed an experimental piece of work in that it is fairly wide open to interpretation; what is going on here is largely left up to the viewer to decide. Some folks will be pissed by the lack of elements associated with conventional storytelling (the ones who don't quite grasp the concept of "arthouse horror" perhaps?). But then, even some of the more broad-minded may be convinced that director Corona isn't so sure what the film is about himself and has, in effect, punked-out of his responsibilities.

Here's where I sit: clocking in at around the 60-minute mark, the film doesn't feel like it takes up too much of one's life or too little in terms of delivering an experience that will make an impact. Oberst commands the screen in every scene he's in, continually proving how much can be expressed with a look, a hesitation, a loud silence. Cinematographer Rodrigo Rodriguez's work is off-the-charts awesome - he really delivers the goods in terms of stunning visuals that sucks one into this strange, macabre world. (Those who have the inclination to believe that the great works attributed to Wong Kar-wai were somewhat/significantly/mostly Christopher Doyle films may find echoes of that belief here. I don't know...I wasn't on the set of this film, but...). And as graphic as the film is (sexual assault including full-on frontal forced masturbation, torture and more) someone (Rodriguez and/or Corona) clued in that those mid and long-shots ala The Texas Chainsaw Massacre makes for a different viewer involvement and reflection than the extreme (and often unnecessary) close-up.

And then there's those cool abandoned buildings. Structures that once had a purpose and an identity that are long gone, re-purposed the way characters try to re-purpose themselves, for better, for worse, for whatever. Another great atmospheric device in the film.

Easy to dismiss but hard to forget, DIS is certainly an experience; what kind of experience it ends up being for anyone who has the courage to regard it...?
Posted by film guinea pig