IN PRAISE OF THE OUTRÉ: NOVEMBER and IT TAKES FROM WITHIN

Fans of traditional linear narrative (AKA spoon-fed) offerings will not be clamoring to see the films in the spotlight here. Those who like to have a little cinematic fresh air in their viewing diets are encouraged to read on... 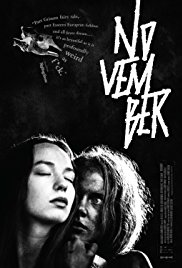 It's difficult to create accomplished celluloid curvées of the vulgar and the beautiful, the monstrous and the magical - Rainer Sarnet's November is one of the more successful films I have seen achieve such in some time. (One may use The Ballad of Narayama as a litmus test for what I have just referred to.) The production, rooted in 19th century Estonia by way of a novel by Andrus Kiviräjk, does have a narrative spine running through it involving the mission of young Liina (Rea Lest) trying to distract her heartthrob Hans (Jörgen Liik) away from his yearnings for an appealing but troubled baroness (Jette Loona Hermanis). Of course Liina's dad is more than willing to pawn his girl off to one of the older local slobs. That's about as conventional as things get here - while this scenario plays out all kinds of quirky happenings befall the rest of the village folk: the dead returning for saunas and a bite to eat on All Souls Day; the masses worshiping Jesus while making soul-swap deals with Satan (who can occasionally be fooled for awhile when the cards are played right); a regularly occurring plague taking on the persona of various animals. The strangest of the strange involves the presence of the Kratts, the dead souls of peasants who become embodied in whatever is lying around - wood and bones are a popular combo. In the meantime you have the stark contrast of the starving villagers (for them stealing is a way of life) and their wealthy German baron, who may or may not be as clued out as he looks.

At times November seems to have too much going on...and at other junctures not enough. What holds the experience together is the breathtaking black-and-white cinematography (kudos to Mart Taniel) that draws one in like a magnet to this gothickly bizarre yet dream-like world. When things get truly dark in spirit, they become truly dark on screen, only to then change tone and light up in beautiful poetic imagery. The strong ensemble cast that seems like they were born to take on each of their roles helps to make November a work that the art house crowd should appreciate. 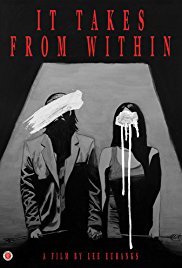 Even more cryptic and shot with far fewer resources, Lee Eubank's It Takes from Within also features mesmerizing b&w imagery (Jason Crow takes no back seat to other cinematographers here) but equally captivating is the soundtrack; a brilliant pastiche of music, voices, and other sounds that keep spinning the film into layers beyond what is being shown. The film definitely starts in head-scratching fashion with a dapper younger man and an equally well-dressed woman finding themselves in the silent company of an older couple lying in bed with yet another duo crawling on the ground. It could be the same pairing in different stages of their lives but, as other parts of the film insist, such conclusions are up to the audience. The only narrative certainty is that the main protagonists (unnamed, as are all of the characters) are in a small town to attend someone's funeral. An argument in their no-frills hotel  room becomes the root of their taking separate directions, with the woman stumbling over a dead body, and encountering a rather excitable old woman before heading to a cafe where a pick-up eventually plays out. Her original mate goes through masturbatory fantasies, sitting in cars where he spouts poetic utterances to no one in particular, and acquiring flowers which eventually burst into flames. Not exactly a Cameron Diaz type of flick...


The acting ranges from appropriately stilted to aptly ludicrous, depending on the character and the mood Eubank attempts to establish. The narrative (if you want to call it that) sails between scenes that don't seem to want to make literal interpretations available but nonetheless connect to provide a dreamish experience that has you wondering who it reminds you the most of in terms of cinematic signatures: Bergman? Goddard? Lynch? Mentioning those three names will appeal to those who find such filmic forays worth one's time, and while I won't put Eubank's effort here into quite that class, I did find it to be a worthy addition to the avant-garde set.

With no conflict of interest re: remuneration (and as a fan of such films), I provide you with some links to check out two intriguing works that the more cinematically courageous should spend some time examining. I'm glad I did.

The folks who made November want you to know their film goes into release in New York on February 23rd, followed by an opening in Los Angeles on March 2nd.

The people at First Run Features have made It Takes from Within available for purchase.