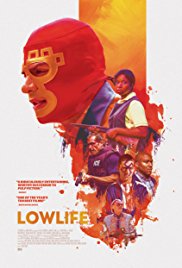 Let's see...we have the Lucha Libre guy, a masked wrestler burdened by not having lived up to the legacy of his predecessors and who goes through blackouts, after which the carnage he's fostered become evident. He's a pretty good fella at heart - he just has this habit of going along with human trafficking, forced prostitution and the black market for organ transplants. Then there's the motel owner, a recovering junkie, who gave up her daughter - the same daughter who's married to the wrestler and is herself addicted to heroin. Call me stupid but I'm guessing that's not suppose to be in the playbook for someone who is several months pregnant. That same motel owner is hoping that the child she ditched will be munificent enough to consider donating a kidney for her long-forgotten daddy, AKA the motel's owner alcoholic husband, the same guy who frankly doesn't give a fuck whether he lives or dies. There's also the odd couple: the middle-of-the-road looking accountant who stayed above water by having sold out his now out-of-prison buddy, who makes for a strange bookend - he would be the one with the swastika tattooed to his face. But all these folks with their various bad habits and deficiencies are nothing compared to the really bad guy: Teddy, whose restaurant is just a cover for the body organs and prostitution biz he has going with the aid of an ICE agent. Each of these highly interesting characters are introduced through segments that create a non-linear, circuitous narrative, complete with titles for each of the chapters, provoking obvious comparisons to the early works of Tarantino.

As a director's first-time feature Ryan Prows shows he is more than adapt at providing an accomplished long-form offering. The film looks crisp, with excellent visuals; in fact, all the production values are top notch. Lowlife juggles heavy drama and black comedy with aplomb. The cast brings on strong and absorbing performances. From an action standpoint there's never a truly dull moment...

...but, at the same time, that doesn't mean patience doesn't wane. Effective circuitous narrative strikes me as being a balancing act between filling in blanks and offering up the unexpected. When it became obvious that there would be backtracks to reveal more of the story and character info, I was finding Lowlife was working against its desired energy level and would have liked to have seen it push on, rather than rehash so much. Others will disagree but I found this was one film where a more linear handling of the story would have helped. And as far as Tarantino fans go, some will feel Prows has delivered a worthy homage...others may find this to be a too warmed-over approach with shades of paint-by-numbers, which would put them in my camp. Lowlife has its merits, is far from a waste of time, and deserves to find an audience, but as a film that so obviously wants to leave a mark, it ranks as more of a passing entry.
Posted by film guinea pig No comments: