The under-the-radar factor:
This small indie production has screened at over 40 film festivals and picked up awards at the AFI Fest, the Independent Spirit Awards, and the Reykjavik International event, among others. In spite of crossing the globe at these gatherings and winning positive critical notices, this work has received extremely limited exhibition possibilities and nothing too significant by way of digital channels.

We've all encountered those people who you meet for the first time and they just can't stop it. The loquacious. The wind-bags. The gab-a-holics. People who talk a lot but really say little, if anything. But they go on and on. Then there's the quiet introverted types who feel drained by even attempting to put forward a welcoming remark.

And then there's the young Japanese girl who stares blankly with hardly an utterance since she can neither understand nor make herself understood in Littlerock, put out by Indie Spirit "Someone to Watch" winner Mike Ott. Fortunately, his film, a second feature effort for him, is itself mostly well worth watching. 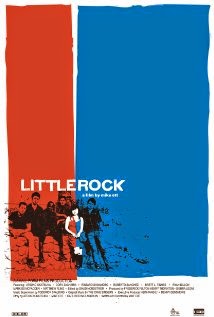 Siblings Atsuko (Atsuko Okatsuka) and Rintaro (a young gent named Sawamoto, also going by his real first name) are taking a trip across the United States, much to the disappointment of their father back home. He's detail driven and cautious - she's more relaxed and open to experiences when they come up. Bro speaks a tiny bit of English, which is lot more than his sister can muster. Their rental car breaks down in the Los Angeles exurb of Littlerock, a place which is about as anti-glamorous as California gets and the driest the state has been seen on screen since Polanski's Chinatown. While waiting for a replacement vehicle they first meet some of the shiftless locals at their motel in a confrontational manner but are quickly adopted by the populace at large as new friends. Much of this has to do with the fact that many of the Caucasian boys find Atsuko attractive and alluring. Two in this boat are Cory (Cory Zacharia), a somewhat effeminate fellow in trouble with the local drug dealer for having smoked most of what he was suppose to distribute, as well as Jordan (Brett L. Tinnes), a wannabe musician who can't suppress the glint he has in his eyes for the oriental visitor...for which she "glints" back. Together they take their new Japanese friends sight-seeing (in this town, that doesn't amount to much) for which two-wheeler bikes (not the motorized kind) are supplied. These same two locals blokes are not, however,  too broken up when Rintaro decides to go ahead with a visit to San Francisco without his sis. She proceeds to find romance with one fellow, artistic endeavors of sorts with another and gets to pass time alongside an immigrant cook (Roberto 'Sanz" Sanchez) that she can't talk with but can relate to. Rintaro eventually returns and, while I won't go into the details here, the last leg of the trip taken by brother and sister delivers a poignant (and unexpected) conclusion to their tale.

Ott seems at home delivering a film at this scale, which is not as easy as it sounds. Staying within smaller confines and resisting the temptation to paint bigger pictures is a discipline not everyone possesses. Littlerock is a simple and appropriately subtle tale. The characters in the film are neither saints nor satanic - they're simply real. The Asian girl finds herself alone with the guys of the town, instilling enough creepiness and suspense to her plight. At the same time, while Atsuko may be unworldly, she's not naive or stupid. It's obvious the local residents are their own worse enemies, particularly true of Cory. Even though he's the one who can speak English, he seems less clued in to what is going on around him than she does though surveillance and intuition. She discovers, he spins. It makes for a mostly interesting, if somewhat predictable relationship. (Unfortunately, you can see her rejecting of his advances from a mile away, one of the few significant weaknesses in the film.)

The town of Littlerock itself is an interesting ingredient in the movie, a place that seems to be in the middle of a desert and a fairly comical locale to drop off two foreigners "discovering" America. But it's on this blank slate of a nowhere town with a group of inhabitants going nowhere in particular that makes for an appropriate place for the protagonist to get her bearings. Littlerock is largely a film about communications and miscommunications, experienced by both the protagonist herself and observed in the dealings of others who supposedly speak the language.

Mainstream audiences who prefer their movies with popcorn and a heavy lathering of Michael Bay on top will be bored to tears by Littlerock. And even some of the latte crowd will accuse Ott of delivering less than meets the eye. But there are enough of those out there who will appreciate this quiet character study and the naturalistic acting style of the cast to make the trip to this nowheresville a destination appointment.
Posted by film guinea pig No comments: